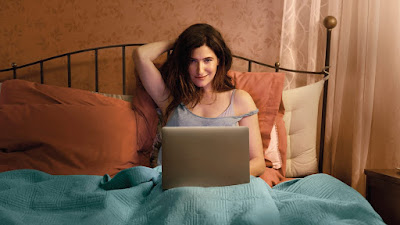 Before we get too far into this review, I have to profess my love for Katherine Hahn.  I am not 100% why I like her or why I am attracted to her, but my love for her as an actress may influence my review of this new series on HBO.

Mrs. Fletcher is the tv adaption of the book of the same name by author, Tom Perotta.  I have not read the book and cannot discuss the similarities or differences between the two genres but Mrs. Fletcher the tv show follows Eve Fletcher, divorced mom of one son who is about to leave for college and her varying feelings about his departure.  The feelings of empty nest are present, but also, a life that had been placed on hold to raise her child post divorce.  Eve has not been on dates and certainly has not had any sex in several years so there is wonder and anxiousness about this new chapter in her life.

Her son Brenden, played by Jackson White, has all the makings of the high school kid that you want to hate.  He's good looking but cocky, arrogant, and entitled through his white, male privilege.  His relationship with Eve on the eve of his departure for college is one of  ambivalence to the point of annoyance.

The show hits its stride when it focuses on Hahn and her interactions with those around her.  From her best friend, Jane, played by Casey Wilson. and her work at the senior center.  These interactions allow Hahn to be vulnerable and empathetic and you feel for the internal struggle she has as her life has entered a new phase that she may not be totally prepared for.  As a parent, you prepare your child to become an adult and move on and move out.  But what happens when your life stopped being about you and about raising your child?  What are you left with when they are gone?  And who are you now that your child has moved out of the house?

This show has been a lot of fun to watch and has sparked interesting questions about who we are outside of our children.  Finding that line between being a parent and not losing your individuality is a struggle that all parents deal with; especially ones who are raising a child as a single parent.  Good show all around.  Hahn deserves all the props and recognition she is receiving for this show and I am sure a Golden Globe nomination is in her future.

Posted by Brothascomics at 11:37 AM