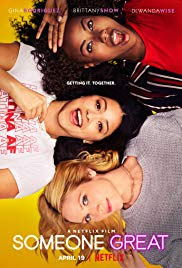 Since Netflix had added that trailer feature for their shows and movies, I have seen previews for things I had never planned on watching.  That trailer really gives you a good sense of the plot and whether I want to invest my time and energy into this show/movie.

So over the weekend, the trailer for Someone Great pops up and I immediately froze because I saw Gina Rodriguez.  And that was not a good thing.  If you have not been paying attention, Gina Rodriguez is problematic AF.  She is that woman who constantly talks over women and she has "ALL Lives Mattered" Black women on multiple occasions. And even when she was called out about it, she went on the Breakfast Club and cried some BS tears in an attempt to save whatever street credibility she had.  She even tried to pull that, "My father is part Black"( he def don't look it)!  So I fully side eye Gina Rodriguez and this movie seems like a ploy to say, "Hey, I am not the prejudice, race sensitive person that you see on TV.  Look at me, I am working WITH Black people".  It seems disingenuous and manipulative based on her previous statements and actions.

Regardless, I let the trailer run because I am a sucker for romantic comedies and the rest of the cast at least intrigued me.  Someone Great is the story of 3 almost 30-something women transitioning through major adulthood shit.  Blair, played by Brittany Snow, is in a relationship of convenience with a man she clearly does not love and is cheating with another man.  Erin, played by Dewanda Wise, is a Gay woman who refuses to settle down because she had been hurt in the past.  And Jenny, played by Gina Rodriguez has gotten the job opportunity of a lifetime with Rolling Stone.  The problem is the job would require her to move to San Fransisco and she has been in a long term relationship with Nate, played by Lakeith Stanfield.  Nate, when presented with the news of her new job thinks they should break up and not even consider doing the long distance thing which breaks Jenny;s heart and leads to each woman examining their relationships moving forward and of course a last night bash to celebrate their friendship together.

The movie is told in flashback mode to see the evolution of the relationship between Nate and Jenny and how their relationship affected the friends around them. Sadly, Blair and Erin's relationship issues are not able to be fully fleshed out as we are constantly dealing with Nate and Jenny and as their issues wrap up, a quick happy bow are put on them without any really exploration of the characters.  The movie, at 1 hour and 23 minutes really didn't leave much time left for supporting characters.

The good about this movie is the deepness of the ladies relationships and you feel that joy and angst throughout as they struggle through real life stuff.  Society will lie and tell you that you need to have all your shit together by 30 and that is a fallacy.  If anything, moving towards 30 often puts into focus the things you have not accomplished and can often lead to episodes of anxiety and depression and "what am I doing with my life" conversations.  Put on top of that a very personal relationship, with all its ups and downs... entering your 30's can often be a bigger landmine than being in your 20's and I think Someone Great captures the spirit of that!

The bad about the movie is that Jenny and Nate have zero chemistry.  I love Lakeith Stanfield and dude is a great actor but I was not feeling him in this role.  Plus, the movie struggles a lot with what it is.  Is this a comedy or a drama because its billed as a comedy but there are not a lot of laughs to be found here.

This movie was very similar in tone to another Netflix movie, Ibiza, which premiered last year.  Three women who are on a journey and we are along for the ride.  Overall, not a terrible movie, but it definitely could've been better by exploring each woman's journey more fully.  Gina Rodriguez's Jenny from the Block routine is in full swing now.  Let's see who falls for it!

Posted by Brothascomics at 12:58 PM No comments:

As Sunday closes down, the early box office numbers have Shazam coming in around the projection a month ago with about $55 million and a total closer to $60 million from the early preview weekend they did a few weeks ago.

At the time tho, my fellow Hacks had not seen the movie so it was a one-sided review and having had some time to reflect on the movie, I still feel the same way as I did when I left the cineplex.  The movie is a lot of fun and is in line with what a Shazam movie should be: Lighthearted, family centered, and fun! Lots of fun!  I found tho, in my watching and reflecting, that even tho its one of the best DCEU movies, I am 100% sure that movie was not made for me.  Now this is not a "Comic Book Guy" rant coming. Not at all.  Its more of a, " I am getting older and some of these comic book movies are not made with older viewers in mind".  And that is fine and something more I have to rectify with myself; not with DCEU.  I saw the movie with my daughter and she loved it.  She is also 12 and I feel is the real target audience of a movie like Shazam.  It plays to kids and younger audiences.  The jokes, the plot, and the character of Billy Bastion plays towards a certain demographic and I am clearly not in that demo anymore.  As a reviewer, its up to me to put that aside and review the movie for what its worth.

Our story starts off with a cold opening and a young man who is arguing with his older brother and his dad in a car ride in the 80's.  In a moment, the young man is swept away and taken to a magical place where he meets a wizard, who judges him based on his heart to see if he is worthy of being Shazam! He is not and is cast out and over the years, after being so close to that level of power, little  Thaddeus  grows into our villain in the movie, Dr. Sivana!

In present day, Billy Bastion is an orphan in search of his real mother.  He has bounced around from foster home to foster home and after an incident with the law is placed with the Vasquez family and even though he has no intention of staying there, circumstances place him in a position to not only stay, but grow, especially to his younger foster brother, Freddy Freeman. While there relationship is initially contentious , Freddy grounds the movie purely in comic book mode as he is a living encyclopedia of the DCEU universe ( the movie is set in a world where Man of Steel and Batman  V Superman have already happened)

Billy winds up getting the power of Shazam and all the early shenanigans of learning about his powers are cute and the jokes really play well with the teenagers.  Of course, this is a super hero movie and once Dr. Sivana finds out that Shazam exists, he is out to steal his powers which he feels are rightfully his.

The CGI in this movie, especially with the demon villains that follow  DR Sivana around are kind awful.  The movie culminates with a big battle in and around Philadelphia.  Again, Shazam is about family and we do get the big Marvel Family reveal at the end of the movie and again, its fun and will play well to younger audiences.

For me, I liked the movie but I hear people over praising a bit in my opinion.  Its not the dark, drek that Snyder imposed upon DC comic and movie fans and I thank them for that.  But also, in attempting to not be drek at all, it may have been a little too light on drama and the villain is kinda awful.  That will always be an issue for Shazam as his rogue gallery is pretty weak outside of Black Adam.

Overall, fun movie!  Definitely not great like people are praising it to be.  If you are a younger fan( under 30), you will probably love it!! It was truly made for you!!

Posted by Brothascomics at 7:21 PM No comments: 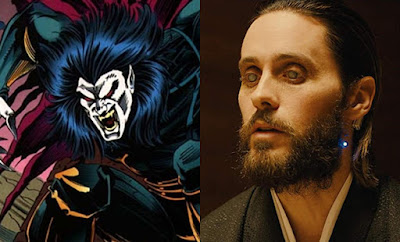 Our friends over at Heroic Hollywood had an Instagram photo of Jared Leto on the set of the Spider-Man spin off movie, Morbius.  We have been clear @brothascomics that any movie involving Spider-Man villains without Spider-Man is going to stink.  I know Venom made a bunch of money but that movie is not very good.  Sony does not care!  They just wanna keep pumping out theses bastard movies and people keep falling for it!

Hit the link to read the article and check out the on set photo!
Morbius Set Photo

Posted by Brothascomics at 6:38 PM No comments: