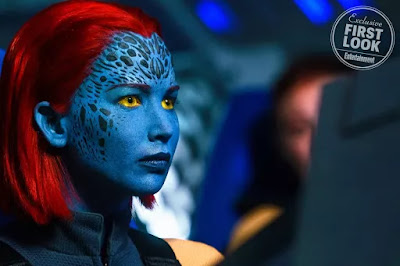 Even tho we are a full year away from the next.. and possibly last Fox controlled X-Men movie, the press is starting up for the X-Men: Dark Phoenix movie.

Jennifer Lawrence took her time on the press junket to complain about her time playing Mystique.  She complained of the make up and that she was going to be done with the X-Franchise after X-Men: Apocalypse.

But the part that she left out was- many of her movies since that time have failed to live up to box office expectations.  Both Passengers and Mother were box office bombs and nothing says comeback like getting a big fat check from a movie and studio desperate for stars.  Lawrence plays it off that her good friend became the director and she wanted to come back for the fans.  Bish please!  No true X-Men movie fans cares a shit if she is in the movies; on top of the fact that Mystique has nothing to do with the source material.  Her character has been a plague since she became a star and I have no doubt that will continue with Dark Phoenix.

This is just another strike against Fox and this movie for me! The sooner Disney has control of the X-Men universe the better!

Hard pass from me!

Posted by Brothascomics at 3:06 PM No comments: