This is part two of our coverage of Baltimore Comic Con.  Brother Beavis held it down for the family portion of the show and you can read his experience here:

As brothascomics has always done, we aim to bring coverage to Black Nerds( Blerds) who have often been left out of comic book nerd culture or been shunned for their participation in it.  Comic book culture often can be a gatekeeping culture and we aim to knock those gates down by highlighting cosplayers of color.

So check out some of our photos below and always allow your geek flag to fly no matter who you are!! 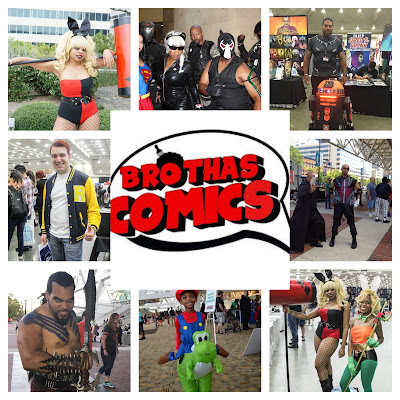 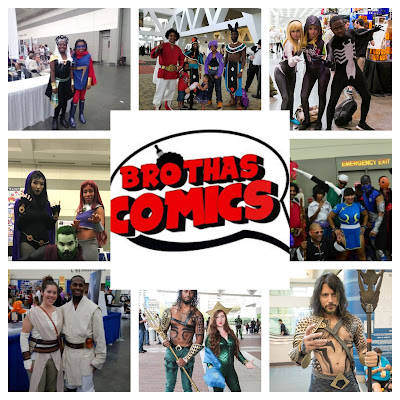 Cosplayers in Baltimore really showed up and showed out!  So many dedicated nerds who have crafted a niche for themselves in nerd culture.

Beyond that, the con was outstanding!  Baltimore Con, unlike many other cons, has a major focus on comics.  There were many guests from the fields of entertainment related to nerd culture, but the real star of the show are the comics and the comic book creators.  Such a talented roster of creators from the Big Two at DC and Marvel, but also many independent creators.

Overall, a great experience for myself and Brother Beavis.  I look forward to making it back next year!


Posted by Brothascomics at 9:09 PM No comments:

Phoenix as a 2 Part Movie

News broke last week from Olivia Munn, that the new X-Men Phoenix Movie is going to be a two part movie?  Werd? Really?  First off, they not telling Olivia Munn too many secrets to the franchise.  Her bit role in Apocalypse was easily forgotten and her even being in the next movie is a sad state of affairs.  Secondly, X-Men movie producers have already stated that the movie is not going off world.  So that means no Shi'ar, no Imperial Guard, and probably no Lilandra.  If the movie is set on earth, going from Phoenix to Dark Phoenix is not gonna make

At the end of Apocalypse, Jean already has dispaled the power of the Phoenix.  A story about where that power came from, would make sense and you could even use Magneto in this movie since Fasbender is already involved.  You could maybe tie in the story of Mutant X, AKA Proteus on Muir Island.  There is some potential there if you plan to stay on Earth.

But, if it stays on Earth and never even touches on the intergalactic portion of Phoenix and the Phoenix Force's threat to the galaxy, then its just another story- no different than the Last Stand.  The X-Men movie franchise has been so dead set on not making their world/universe bigger to give the characters more depth.  We keep getting fed the same people over and over- without letting any of the younger characters shine.

So, #FoxGonnaFox will continue.  I have no real desire to see this movie at all and the fact they may drag it out over two movies makes me even sadder.

Posted by Brothascomics at 6:21 PM 4 comments:

In the days before being able to stream( steal) content from the Internet, the only way for you to see something that you didn't already pay for was to: Go to a friends house; or get a bootleg.  Black folks in my hood are no stranger to bootlegs, or booters.  I had several bootleg music tapes and movies growing up. Usually a young entrepreneur would be set up at the barbershop or on a random street corner with goods to sell at a discounted rated.  You may get ganked and the Dana Dane tape you buy is a blank of the copy of Krush Groove was in Spanish... but that its the chance you take with buying booters. Its on some Forrest Gump shit... you really never know what you was gonna get! 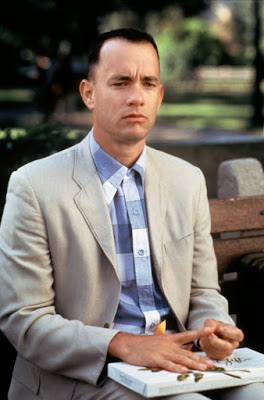 However, as technology got better and brothas got a bit of money, things weren't such a crapshoot.  My family ain't have HBO money tho, so whenever I wanted to see Wimbledon or anything that was HBO exclusive, I had to go to somebody house.  Now when Def Comedy Jam came on in 1992, I was in college.  In a white college, where finding booters was not a possibility.  And since we was all broke, nobody had HBO.  Shit you was flossin' if you actually had cable.

So I missed out on Def Jam for the most part. I'd hear people talking about it, but I had really never seen it.  Then when I did come home, my moms ain't have HBO money so I was back looking for booters.  When I finlly caught a good booter of Def Comedy Jam, I was kinda knocked backed.  The language, the energy, the crowd losing they shit... it was like nothing I had ever seen before.  You gotta remember, this part of the 90's was owned by Cosby, so to see Black folks embracing they culture this way was shocking in a sense.  But funny!  Like, really, pain in your guts funny. Like crying funny!  Martin hosted it and the comics brung it!  I was hooked for sure on the likes of comedians you just had never seen before.

So as time has gone by, many of those Def Jam comics went onto huge things from tv shows, movies... Def Jam spawned an empire of rich, Black comics. So, when I heard about Netflix doing a 25th anniversary show, I was with it.  I really wanted to see what Earthquake and Hamburger was up to. 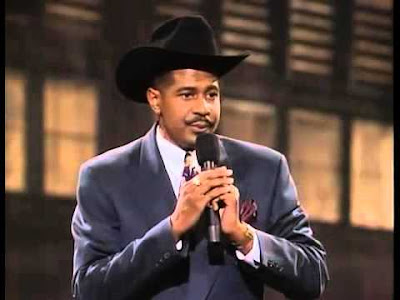 But you didn't really get that... I mean you did, but it was more retrospective on how the show came about and all the come ups that people received from the show.  Martin, who was such a huge part of the success of the show, really only has a bit part, and much of the show focuses on some of the comedians who DIDN'T get a huge come up from the show.  Even tho he came through with a video, Rock wasn't there and I am pretty sure Chris Tucker dont fuck with any of these niggas anymore.

Overall, it was ok! Some laughs here and there, but nothing major!  And just FYI, don't book Dave Chappelle on any comedy show uness you want him to take it over.  His pressence is that big right now! He outshines and eclipses anyone you attempt to put on stage with him and when he is not there, you can feel it!

So check it out!

Posted by Brothascomics at 4:42 PM 4 comments: 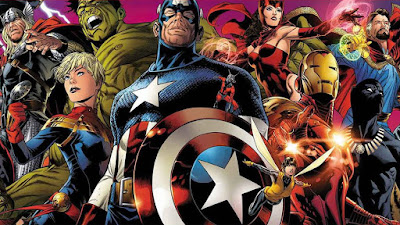 Control-Atl-Delete.... for many of us older computer users, we know that sequence of buttons, pressed together, will restart your computer and get you back to the beginning to open up Windows or whatever operating system you use.  Its helpful when your program gets stuck or wont respond properly and the restart or reboot, sets things back to "normal" so you can begin again.

Well, Marvel and DC for that matter love hitting Control- Alt- Delete with their comic book properties.  In fact, its really become so mainstream now, comic book companies really build around their reboots as a way to get fans excited about a potential cross-over or new line of titles that will bring in new readers.  Its bullshit! Old readers know this and even tho we keep falling for it, we fully recognize that Marvel and DC is just trying to line they pockets with money off the backs of their fans.

That being said, Marvel hits reboot again, with Marvel Legacy.  The next step/chapter in the Marvel comic universe after Secret Empire.  Marvel has been bragging about this being a "return to traditional heroes".  What this really is- a return to white, traditional heroes.  Marvel took a swing for the fences after Secret Wars 3 and gave non traditional heroes a chance to run the company.  Traditional white heroes were "replaced" with their Person of color counterparts... as we have come to call it, the Plessy V Ferguson heroes.  This attempt to get new ( non white) readers interested in the books was met with massive white fan boy violence( well they beat the shit out of their keyboards, as least) and in some cases indifference by people of color over the titles.  This tepid review of THAT reboot got Marvel to thinking very quick about returning the white dudes and Marvel Legacy gets us there. So even tho Iron Heart, Moon Girl, Sam Wilson Captain America, Lady Thor et al will still be around, they are definitely being placed in the background for their white counterparts. 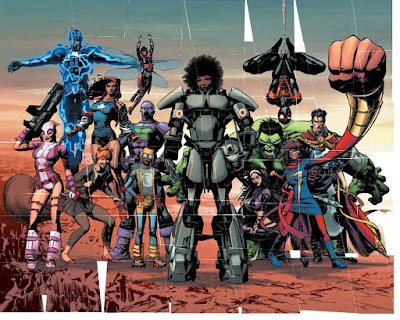 Now this may seem like I am shitting on Legacy... I am not. I enjoyed the book but it really is just a "teaser trailer" as Brother Beavis called it.  Yes, there is an underlying plot with the Celestials, but for the most part, the book is a check in/check out on our heroes.  The Avengers founders- Captain America, Iron Man, and Thor are all in certain places up upheaval, Ghost Rider is fighting an unknown foe, and of course we check in with for no real reason at all other than putting him in the book.  There is also a final page reveal of the potential return of the Fantastic Four and of course,
like modern comics,  there is a surprise return of a thought dead character- spoiler pictured below 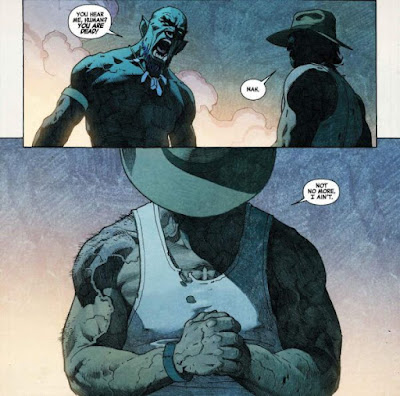 The book was well written, paced, and drawn and for me, at least, I think this reboot could mean something if Marvel wants it to mean something.  We love our traditional heroes, even tho we also have love for their replacements.  Both can co-exist without shitting on the other.  If Marvel can commit to the books being there own thing- not just vehicles to move the narrative with Marvel Cinematic, they can create to genres that are both strong and thriving.

So this was a thumbs up for me. You can listen to the podcast in the link below and see what the rest of the crew thought!