Brothascomics Baltimore Comic-Con Review
My first comic book convention was in Dayton, Ohio back in my comic buying heyday. I don’t remember it having a fancy name or logo and I don’t remember having to pay to get in. I do remember it being a complete sausage fest with a bunch of comic book long boxes laid out on folding tables in a crappy ballroom. I was there with a list of missing back issues, looking through every one of those boxes hoping to fill in the gaps in my X Men collection. I haven’t been to a lot of conventions since those days, but I know comic book conventions have had a few upgrades since then.

My Baltimore convention experience is mostly as a spectator of the now departed Otacon, which left for DC this year. We would camp out in outdoor seating at one of the restaurants on Pratt Street – the main road between the convention center and the Inner Harbor - and watch the spectacle pass before us. In my crowd, I was the only one with any nerd cred, so I would be identifying (some of) the costumes and everyone else would be not caring. It was a lot of fun - after hearing one too many “these nerds/freaks” comments and having one too many beers, I would usually start ranting and irrationally criticizing my companions for their mainstream interests (“Why you drinking that water, water nerd?”). Good times.

I’ve known there was a Baltimore Comic-Con, but I never knew much about it. It’s always been on my, “Someday, I should …” list, and today was finally the day. I donned my Brothascomics t-shirt, suited up my daughter in her Batgirl gear and we hit the con with all the speed and endurance of a 7-year old girl – which is to say, not very fast and not for very long.

The Baltimore Convention center is pretty big, with a couple different buildings spread out over a couple blocks. Once we got inside, we had to go upstairs to register. I could have asked for directions at this point from the many people helping out, but I chose to follow people who looked like they knew where they were going. They didn’t. After actually reading the signs, we found the exhibit floor a level down in the basement. The exhibit floor was huge, with lots of vendors – way more than we could get to in the couple hours we were there. We made a point to stop by the Third Eye Comics booth, which is our local store in Annapolis. I was halfway motivated to look for a New Teen Titans trade, but my long box rifling skills are nowhere near what they were back in the day.

Cosplay at the con was great. I have tremendous respect for cosplayers and the amount of passion and energy they put into their craft. As usual, there is that somebody you see right when you get there that you don’t get a picture of and then never see again – this time it was a dude in full Aqua-Bro cosplay. Looked great. I did get a picture of Gambit, one of Brothascomics most loved and hated X Men, and a great Medusa. 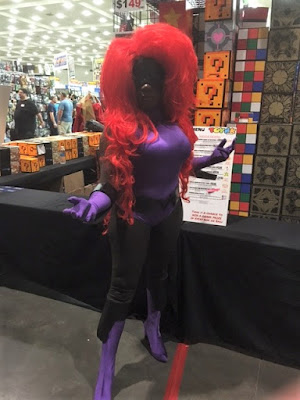 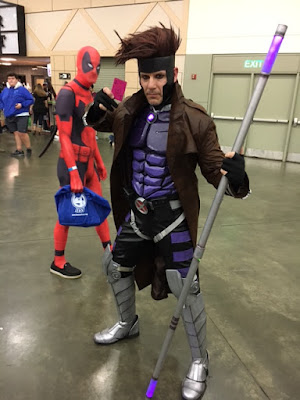 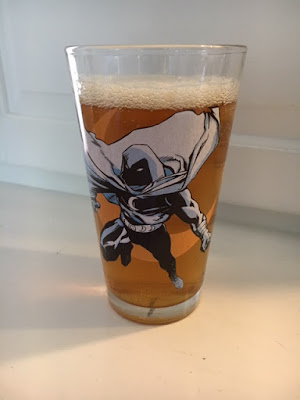 Posted by Brothascomics at 1:44 PM