Can We stop with Arnold Remakes 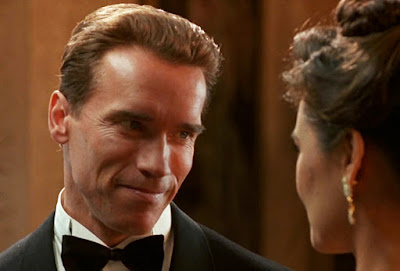 This wont come as a surprise to many, but I am not a real fan of the action movie-especially those made in the 80's and 90's.  I have never seen a Rambo movie and many of the other action stars of that era, I passed over a lot of those, too.  I saw the Die Hard 1 and 2, but after that I bailed on all of those.  I never seen a Chuck Norris movie.... its just not my bag.

The ones I mostly did see were with Arnold Schwarzennegger;  mostly because my college roommate, Jim loved the dude.  As a body builder himself, he admired Arnold and he would make( force) me to watch Arnold movies... a lot.  I have seen the Terminator so many times because of Jim!  And I get the appeal of Arnold in the 80's and 90's.  He was charming, built like a brick house, and his coming to America from Austria rags to riches story is appealing on many levels.  So I sat through Predator with Jim( we even saw Predator in the theater), Running Man, True Lies, and of course Total Recall. And I cannot say I didn't enjoy the movies! They were fun, had action, and Total Recall is memorable for 3 things!


After college, I have not seen too many Arnold movies.  I missed the Last Action Hero, Twins, and I think the only movie I saw with Arnold was Jingle All the Way!  He went onto become the Governor of California and his movies, as profitable as they were in the 80's and 90's, have spawned these horrible remakes in the 2000's and continuation of franchises that shoulda died when he became governor.
But Hollywood would never let that happen.  There have been numerous Predator movies, Terminator is still churning out sequels( with Arnold dropping in like Kendrick drops in on peoples tracks), there was an awful Total Recall remake as well.  Now news dropped this week that there is a True Lies pilot in the works at Fox( see full article below)

True Lies to Pilot at Fox

Can we just move on from Arnold and his movies already?  He and his movies almost seem like a relic of a past era. Those movies worked BECAUSE of Arnold and the era in which they were produced!  Attempting to recreate that magic is not gonna work now and Arnold is way too old to have anything to do with these movies or shows that would be significant.  And on top of that, these young kids today could give a damn about who Arnold is!  And what they do know, is probably not all that positive!

So can we let this era die, please?  I mean make Expendables movies over and over again.  There is an audience for those older action stars and movies. I am sure my boy Jim has seen and loved all the Expendable movies.  And I am sure if I were around, he woulda drug me to see all of them.  But unless the 3 boobed lady showed up, I don't think I have any real interest!

Posted by Brothascomics at 10:51 AM