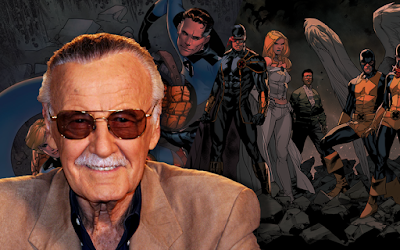 I love Stan Lee. Love HIM!  He was really like my Father growing up because mine was not really around. I spent more time reading the words created by Stan Lee than those who were inspired by Jesus.  I truly adore this man and what he as done in the world of comics.

News dropped this week  where Stan Lee stated that Marvel is working on trying to get the rights back from Fox for X-Men and Fantastic Four.  These two properties would complete Marvel/Disney universe and fans could get so many of the team-ups and crossovers that we grew up reading.  It seems like a no-brainer- except for the billions of dollars involved.  Fox is in no hurry to give these properties up and Marvel/Disney is in no hurry to pay them the billions to get them back.  Its comic book game of Chicken seeing who will blink first.

Here is what I do know... at no point in these conversations between these two media conglmorates did they call Stan Lee and let him know what was happening. I am sure the revere them man who has helped line their pockets with money, but like the Queen of England, Stan is just a figure head at this point with no real power.  Just keep making them cameos and fly the flag but Stan is not in the board meetings anymore.

I'd love it if this happened.  Fantastic Four and X-Men need to be under the Disney/Marvel banner!  But I don't see it happening anytime soon.

Full article from our friends at Geeks of Color( hey Dorian)

Marvel working to get Fox Properties according to Stan Lee