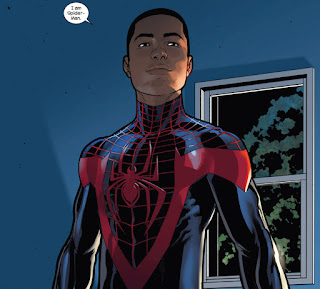 Yeah but no to Black Spiderman

This article got me thinking alot about Miles Morales and Spiderman.  Everyone of you should have seen the information from the Sony Hack detailing all the requirments for Peter Parker and Spiderman- the two biggest being that he must be white and he must be straight.  As you can imagine, this made alot of people upset and I even wrote a 1000 word piece about it last week

This comes on top of the news that they picked fill in the blank white actor  to play Peter Parker/Spiderman yet they are going to have Miles Morales be Spiderman when the books resume post Secret Wars.

The Vox article talks about how Marvel and Sony COULD do a Miles Morales Spiderman movie but they just don't want to.  The author goes into this idea of intellectual properties and shared visions and blah blah blah.  Marvel/Sony don't want to do it because they think it will turn off its white fan base and those nerds/geeks (who they value over Blerds) will not support it and they will not make their money.  So instead of taking a chance or being a leader in diversity, Marvel takes the safe( white) route to keep cashing Spiderman checks.

I have been clear that I don't think it matters who is under the mask.  It really does not matter. Kids and big kids want to see what Spiderman can do, not so much of what is going on in the life of Peter Parker. There have been two Spiderman origin stories in the past 12 years- people know the character and how he got his powers, and with great power comes..... We got it already!  But I don't think Marvel and Sony are going to get totally off the hook with this Miles Morales situation and that information from the Sony hack.  And I know how tv/movie people work when there is a negative associated with their product- they try to appease without offending and I am willing to bet that is what happens here.


I am predicting that Miles Morales/Spiderman will wind up on the small screen as a tv movie/Netflix series OR, Miles Morales will be Spiderman in the next animated Spiderman series.  He has already made an appearance in that gawd awful Disney Ultimate Spiderman and since Miles is technically the Ultimate verse Spiderman, this would not be that big of a stretch and Disney/Marvel/Sony can pat each other on the back or circle jerk themselves over how they are really pushing Diversity( with animation, not people).  Forgive me when I yawn when this happens!

The primary consumer of Spiderman products-outside of comics- are kids and children.  Those kids and children, unless you as a bad parent/adult, point it out to them, don't know or care who Spiderman is.  They just wanna see Spiderman.  I hope in the future, my half black , half latin son can see himself represented by a positive hero on the big screen.  I just wont hold my breath waiting for it to happen.

Posted by Brothascomics at 4:31 PM