Who makes the cut?

From TV to the Big Screen 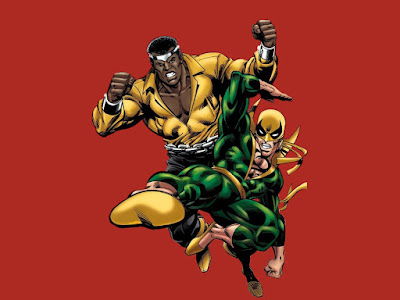 News out of Marvel today from Kevin Feige, who oversees the MCU is that characters from the small screen Marvel tv shows, may begin to show up in the Marvel Cinematic Universe.  This is no unheard of from Marvel.  Characters from the movies such as Agent Coulson, Nick Fury, Agent Hill, Lady Sif, and Peggy Carter have all been on either Agents of Shield or in Peggy Carters case, got her own tv show. Now its cool to see these characters on the tv show but lets keep it 100, its not like we are seeing RDJ as Iron Man or Chris Evans as Captain America on these shows.  One of Hollywood's oldest rules is that, "movie stars do not do television". And I don't see that changing for a second.  Agents of Shield alludes to the characters all the time and to " New York" but we aint seeing no Avengers on that show!

But Mr. Feige was more alluding to characters from the Netflix series  appearing on the big screen and that is a more realistic possibility; although this has rarely been done as well.  Typically, tv actors who play a role have no show of reprising that role when it heads to the big screen( I'm looking dead at you Smallville and Tom Welling).  Often times the thought is that tv actor does not have the ability to star( and makes us money in a big picture so the role is recast with a bigger named actor.

So what to do with the Netflix shows?  Daredevil has already premiered and it was great! The character had been establshed in that awful Ben Afflek movie but now more people are going to associate the character with the Netflix series and Charlie Cox.  Coming later this year, Jessica Jones will premiere on Netflix.  Now, to most novice comic book people, you are gonna be like, "who is Jessica Jones?". And I am with you for that.  I had to shake the cobwebs off the character too and in more recent times, she is best known as a detective who also works in Hell's Kitchen, like Daredevil.  She often times employs heroes to help her with her detective work.  Plus she has a baby by.... Luke Cage, who is going to get a Netflix series sometime in 2016. 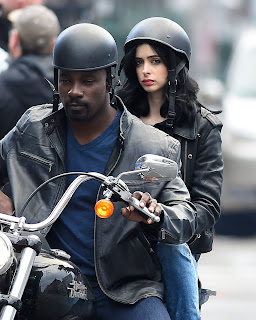 Now Luke Cage, AKA Power Man. is generally one of the first Black superheroes most young Blerds know about( except for maybe Black Panther).  Dude is super strong, has skin that is as strong as steel, and is a general bad ass!  I am looking forward to his Netflix series with great anticipation and hopefully they let him shine on the Jessica Jones show!

But Luke Cage is probably most associated not with his baby mama.... he is most associated with Iron Fist.  Danny Rand, is white dude, but has the power and training of a kung fu master.... He is a great comic book character and I am interested in how they handle him on the big screen.

And then, all of these characters together will form the last Netflix mini-series called the Defenders- where I assume they will fight together against crime in New York, specifically Hell's Kitchen.

Whew!!! So who makes the big screen cut?  In the comics, all of these characters at some point have been Avengers and I think its safe to say that none of them will be in the Avengers.  The screen is already taken up by too many heroes as it is at this point. Guardians of the Galaxy is more of a space story so I don't think they make it in Guardians 2.  So what does that leave you with? Spiderman. Yep.  Peter Parker is gonna have to share the big screen with these heroes if it ever happens.  On the Ultimate Spiderman tv show, Spiderman works with Luke Cage and Iron Fist, and Jessica Jones has appeared as well.  Along with Nova, Dr. Strange, the Avengers... They are all based out of New York and having a cameo in the Spiderman picture opens up the bigger world that Marvel wants to show how all these heroes and events are somewhat interrelated.

So if Marvel is really thinking of opening up their world, its going to have to be in Spiderman.  I cannot see it in any other movies they have scheduled for Phase 3.  I'd like to see it happen too. Anything to take away from having another Spiderman origin story!

-The Producer
Posted by Brothascomics at 1:56 PM