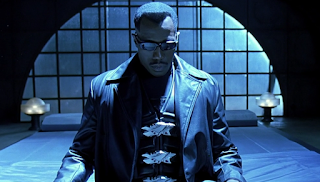 little known fact...LL Cool J was originally to play Blade in the movie!  You have to let that sink in for a second.... In 1998, Marvel and New Line Cinema took a chance with a D list Marvel character and made a feature film that not only was successful, it may have kickstarted a whole industry of movies based on comics.  The original Blade,played thankfully not by James Todd Smith, grossed over 70 million domestic and spawned two sequels which are gawd awful( but I digress)!
For the purpose of writing this, I went back and watched the movie because it had been a while since I had seen it.  It still holds up very well.  Snipes, plays the role with an attitude that Uncle L was never going to be able to pull off.  The opening scene with Blade on the hunt and in the club is one of the best comic book openings I have seen and I know some dudes of a certain age check that is Traci Lords he is hunting.

Watching it again, it almost seems like a template for the Daredevil Netflix show. Its dark, seedy underworld is protected by a hero who is not really a hero.

As the movie progresses, it does not fall into the trap of too much origin story, its handled quickly and characters such as Whistler and even the villain are given time to shine in their own way.  Side brotha note, if you own the DVD, check the alternate ending to see how bad it is.  Had they gone that route, we would not be talking about this movie kick starting comic book movies. We would be talking about how it killed comic book movies.

So props up to Blade.  The 2nd one is not too bad, but Blade Trinity put a stake( pun intended) in the franchise.  Plus, it was one of the continued pushes of Ryan Reynolds in comic book movies in which he has failed 3 times now.  Hopefully, he does not mess up Deadpool

Posted by Brothascomics at 8:05 PM