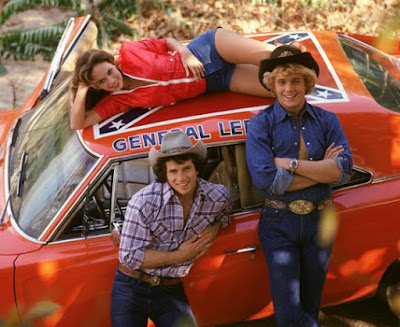 Thanks to by friend Big Frank for pointing this out to me today.

Look, the Dukes of Hazzard came on when I was 8 years old and I loved the Dukes!  Many a day was spent playing the Dukes on the playground at Belmont Elementary School running around like we were driving the General Lee.  And arguing over who was gonna be Luke and who was gonna be Bo( I was a Bo guy).  Man me and my friends( who was all black), even wanted to be Cooter!  I even had some Tiger Beats and what not that had Tom Wompat and John Schneider in it.  I had a Dukes the picture above as a poster on my wall. I had the Dukes trading cards that once your turned them over formed a picture of Daisy. Side brotha note- my 4th grade teacher( older white dude) confiscated my cards and never gave them back after I had the daisy picture formed. I wonder what he did with em?  And for real don't get me started on Daisy and dem shorts.  I was a huge Dukes fan and every once and then, if I get lost looking for something to watch, I will still put it on from time to time and watch!  Man I watched the Dukes during the tv strike when they had their wack cousins on there( a true Dukes fan)! I was Team Cody( man funk Vance)!


But 8 year old,  yankee  raise little Hutch didn't know anything about that flag and what it represents.  Looking back, I guess its not that surprisingthey could run a show with the General Lee and a car with the confederate flag on it. I didn't see or know anything about it.  But as I grew up, and I saw that flag being waved at KKK rallys and skin head rallys, it made me wonder, why they got the flag of the General Lee?  Then I got older and read and saw what that flag is and what it stands for and I'm like, " yo eff the General Lee, and them Dukes( even Daisy)!

In light of what happened in Charleston, its really long overdue to remove that flag from any and all places.  It has no right being flown over state courthouses, no street and memorials should be named after confederate war heroes, none of it.  I commend Walmart and Ebay for pulling all Confederate flag merchandise and I commend Warner Brothers for doing the same with the Dukes. Its probably 50 years too late to be honest! Yes it eliminates a part of my childhood that I enjoyed but maybe I shoulda been smarter then anyway,
Posted by Brothascomics at 7:59 PM