All new, all different?

Since Marvel is not taking the big room at ComicCon, they have sent Kevin Feige out to drop jewels wherever he can about upcoming Marvel projects.  One of those projects is Spider-man which is now being shared by Marvel and Sony and will fully integrate Spiderman into the Marvel Cinematic Universe.  This will first happen with Captain America: Civil War and then  move onto a new( again) Spiderman movie starring fill in the blank white actor.

All New, All Different?

I have written more than enough about the casting of Spider-man to last a lifetime so I am not going there( at least not yet).  In the article, Kevin Feige speaks about how Spider-man and the casting of fill in the blank white actor will be different this time because of the age of the actor cast as Spider-man. HUH? Word?  When they cast Tobey Maguire, everyone knew he was way too old to be playing a high school student, yet they placed him in high school anyway.  When they cast, Andrew Garfield to play high school Peter Parker, we all knew he was pushing 30 and was way too old to be in high school.  Fan can suspend belief.  That is why movies are popular,  The issue comes up later int he article where he talks about that is the cool part about Spider-man... that a kid, who accidentally got his powers, is one of the most powerful people in the Marvel Universe. I actually agree with that.  But that is where is stops- especially when dealing with the upcoming movies.  NO ONE wants to sit through another Spider-man origin story. NO ONE!  If they start this new series from there, I am out and I wont see it... I mean ever because its been done in the movies twice. Plus, Spider-man... everybody knows how he got his powers and how his uncle died and with great power... We are all familiar with that. Putting him back in high school is a step backwards for the character and almost forces Marvel to have to do some version of his origin in the movie. There is no need for this and is the exact opposite of all new and all different.

The biggest drop from Kevin Feige was how Spider-man will now interact with other heroes in the Marvel Cinematic Universe.  That makes sense, especially seeing how he also dropped a hint that heroes from the small screen may make their way to the big screen. I wrote about this
Who makes the cut?

This could open up Spider-man and New York to new heroes and interactions and even though Spider-man is an Avenger in the comics sometimes, making him an Avenger right away might not make sense.  But to see him interacting with other heroes who are looking to keep the city safe, does make sense and also takes away from who will be the villain in this new movie ( which is a whole other topic)

So when Peter Parker makes it back to the big screen, expect him to be puny Parker and back in high school with high school issues and problems.  But hopefully he will already have his powers and is working the streets with the Heroes for Hire to make New York safe! 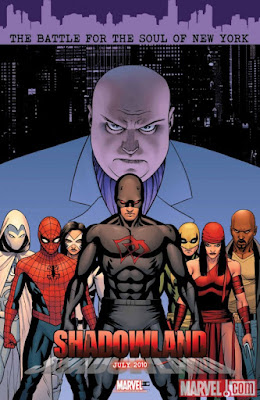 Posted by Brothascomics at 3:14 PM