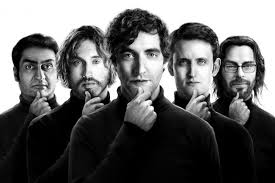 If you are unfamiliar with the TV show Silicon Valley on HBO, I recommend that you check it out.  This show combines all the nerdom of tech geeks and their social awkwardness in dealing with everyday situations and how they maneuver in Silicon Valley.  As well as their immersion in dealing with people who are basically trying to create and one up each other in the tech market.

The plot revolves around 6 male cohorts who are trying to establish a start up Tech Company called Pied Piper.  The company emerges from what was initially meant to be a data compression app.  Richard Hendricks, the CEO, was offered 5 million dollars to buy out his compression app by a company called Hooli (Google).  However, he turned down the offer, to establish his own start-up which consist of 5 roommates who occupy a house in Silicon Valley called The Incubator.  The Incubator is run by Erlich Bachman played brilliantly by T. J. Miller.  T.J. Miller has one of those very distinct voices that may be recognizable from his work in animation, commercials as well as feature films. 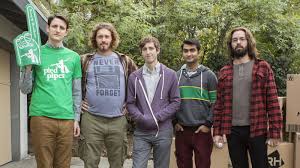 The reason this show resonates with me is because it takes the situations that occur in Silicon Valley and exaggerates them by about 50%, puts a tech nerd spin on it and shakes it up to see what comes about.  It is very cleverly written and presented by all moving parts involved. However, the boys seem to have a run of bad luck just about every week and just when you think that things are about to turn around for them, something else happens.  In other words, they take two steps forward and four steps back.  Comedy ensues due to some of these situations, which runs the gamut of deleting data by placing a bottle of Tequila on the delete button on the computer keyboard to paying $10,000 for a graffiti artist to create a logo for their company which turns into a pornographic effigy.

This show is everything that The Big Bag Theory tries to be but isn’t, which means actually being funny.  It manages to give insight of how you would imagine the movers and shakers of Silicon Valley interacting on a day to day basis and the shenanigans that ensue.  This encapsulates the representation of the emergence of the entrepreneur/future billionaires of the tech industry.

The equivalent of Tech giants such as Google, Apple, Microsoft , Uber and many others gives you a perspective of how these companies have come to dictate how we maneuver through the Tech/Internet/Social Media universe.

It is well worth watching!


Son Gee (AKA Giggle Box)
Posted by Brothascomics at 2:57 AM