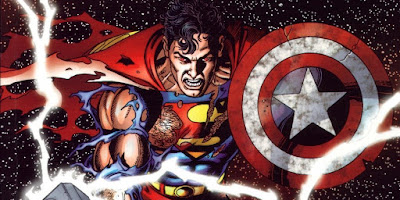 Our friends over at Comicbookmovie.com posted an article stating that Marvel is not booking a major room during comic con.  There was even an inside source that was saying Marvel is running scared because of the Batman V Superman info they are going to drop. Werd?  Its more probable that Marvel does not have much to show or does not need to bother.  They have mapped out their movies for the next five years and they have rolled out hype that showing up for a fee lousy seconds of footage is not going to gain them much.

So let DC get its shine.  They certainly need it.  But think about this, if Superman V Batman were so good, they would have left it at its original release date opposite Captain America to see who the best man is and they didnt. They moved it because they were/are scared.

-The Producer
Posted by Brothascomics at 11:50 PM