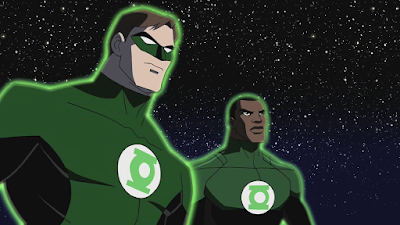 Let me get this out of the way from the jump so big Hutch doesn't say I wont acknowledge my bias.  I am a Marvel guy! I always have been.  In my house, DC stood for Dinky Comics and I have held that for the longest( even when Big Hutch was reading Teen Titans and other Pre-Crisis and Post Crisis books in the 80's).  Once my son was big enough to watch shows, tho, he has always floated towards DC( much to my chagrin).  But through him, I have seen more Superman cartoons and movies, Justice League, Justice League Unlimited, Young Justice, etc... You get the idea.  I have always felts DC's heroes appeal to younger kids because of their God-like powers and its easy to fall into liking them beause they are not as complicated as some of Marvel's heroes.

So over the course of this time, I have learned to appreciate DC, especially their animation.  I even have read more of their comics because of my son.  I read the Justice League when Jim Lee was doing it, I am still reading the Greg Capullo Batman, which has been one of the best books I have read in the past 15 years. So I have a bias, I don't deny that! But its not as bad as it used to be,

Now this news comes out today that DC is looking to restart the Green Lantern franchise after the disaster that was the Green lantern with Ryan Reynolds.  In case you forgot; although the trailer would lead you to believe this is a good movie( its not!)


This man should not get anymore comic book movies.
Hell maybe not anymore regular movies either

But DC, being DC, has the rumor out there that Chris Pine is going to play Hal Jordan.  Previous rumors had Tyrese playing Jon Stewart Green Lantern,  But the report today states that both will be in the new Green Lantern movie in 2018.  Word? There is so much!
1. We don't need or want another Green Lantern movie.  Been there, done that. Let it go! GL has great powers that tranlate well to film- but not for 90 minutes.  He should be in the Justice League movie but that character does not need another movie.
2. BUT if we gonna have one, why the hell would you go back with Hal Jordan?  You did it. It failed! You'd be better having Kilwog star in the movie at this point.  DC worked very hard to get us to accept and like Jon Stewart and now, instead of giving him his own movie, he gotta play 2nd fiddle to Hal Jordan?  C'mon man!
3.DC fails at diveristy.  Look, comics are bad at diveristy anyway, but DC is worse than Marvel.  On the count of three, name black DC heroes not named Cyborg or Jon Stewart.... ready.... GO!

Exactly, we got Firestorm, Vixen, Static, Steele.... It starts to get difficult doesn't it.  So when there is a chance to cast one of their most established black heroes in a role, they split it between two actors. I'm sorry but bump that!  That is weak sauce by  DC.  They have Cyborg already in the Justice League so 2 brothas woulda been too much? Word?  Honestly, Jon Stewart is a better character than
Cyborg who is really more computer than boy now and most people know the character more for this!

Once again given the opportunity to be a leader, DC is a follower.  Given the chance to make their product different, they follow and are afraid to take chances.  If you want another GL movie, give it to Jon Stewart!  You can introduce Hawk Girl and the Thanagarians and the complicated relationship they have.  Or introduce Vixen and their relatioinship.  Stop giving us the status qou and think we are just going to be ok with it.  Ya'll are better than that!

Posted by Brothascomics at 6:15 PM