Gaming in the 80's: Atari and beyond 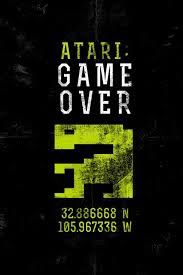 If you have Netflix, you may want to check this documentary out about the rise and fall of Atari. Now you have to be of a certain age to know and understand what Atari was and what it meant and the documentary does a great job demonstrating that.

Back in the 80's and I mean like 1980, Atari was what Nintendo, and Sony Playstation, and Xbox are now.  They were the first in home gaming system that allowed you to play video games at home and not at the arcade.  Originally, games like Pong were popular with the system but later on versions of popular arcade games like Pac Man, Donkey Kong, Asteroids, Frogger, and Centipede could be played at the crib and all you needed was this gaming system, a very rudimentary tv hook up, and a joy stick. When you look at the design now, it seems so basic but this was some powerful shit for the late 70's, early 80's. 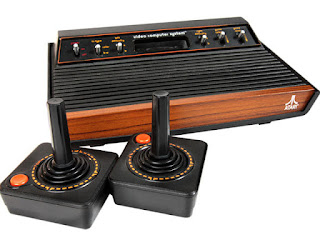 So obviously Big Hutch and I wanted one and dropped subtle and not so subtle hints all the time to try and get one.  We was extra good and nice to each other, cleaned our room( by putting shit in the closets), did our chores. But most obviously, we would play the Atari every time we went to Sears because they had it hooked up inside the store and beg for it when they made us leave.  We probably looked something like this:

We got ours in 1979. We would have gotten it earlier but I got some bad interim reports and report cards and was punished by my 'rents by delaying that purchase.  Once we got it, we played it... alot.  We played before school, after school, before dinner, after dinner.... you get the picture.  We wore them joysticks out on all kinds of games.  And kids, back then, the games only cost like 20-25 dollars- none of this $60 junk. And even tho that was alot of money to our 'rents back then, it seemed to be worth it to them to keep us off the streets and in the house where they did not have to worry about what we was doing( we was playing video games)!  And our house became a landing spot for our neighborhood friends.  We played games all the time on our system or they would bring their games and play them at our house.  In 1980, we were living the dream!

This documentary captures that feeling we had as players- just from the designers and developers perspective.  These dudes was rock stars and was living a nerd life that most nerds could only dream of.  They partied, drank and smoked weed, they played and designed games.... man they even had groupies! Video game groupies!!!

But like all good things, they do come to an end.  On our side, new gaming systems that had better graphics and playability had come out.  Some people got the Intellivision but we wound up going with the Colecovision.  Now if you had Coleco, you know its graphics for mid 80's was extra tight and it made Atari look like...well look like Atari. And Atari tried to keep up by releasing the new Atari 5200, but Coleco had better games and we just moved on from Atari as we got older.  Sensing that shift, Atari attempted to rebrand itself and started to take chances with their Atari system by making more original games, along with the arcade versions of games.  This is when Pac-man for Atari comes out, as well as Space Invaders - which were the two most popular games in the early 80's.  But they looked terrible and played even worse. 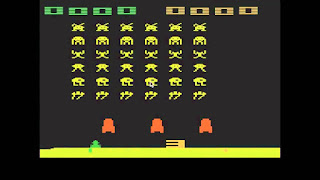 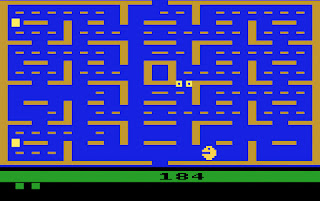 Atari also begin to license out video games based on popular movie franchises and in 1982, the biggest movie in the world was ET.  Atari, taking a gamble because they were losing ground to new gaming systems, agreed to make an Atari version of this game.  If you see the movie, the people at Atari were given a 5 week deadline to make this video games so they could sell it at Christmas time. At this time, a game took at least 6 months to develop.  But the people at Atari worked and got the game out... and it was terrible.  We had a copy! The in game play was poor but more than anything, it was crazy glitchy and was not a game you wanted to play over and over. 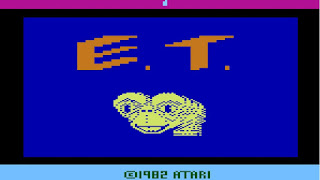 Atari produced over 2 million copies of the game and when it did not sell, they were stuck with them. Over 700,000 copies of a game that no one wanted.  So what did they do?  They buried them. Literally!  In a dump in Arizona, they buried copies of ET  and other poorly sellling games and the documentary is based upon that dump and the fall of Atari.

This is less a movie review than a look back at gaming in the 80's.  From Atari, to Colecovision, to Nintendo, to Sega for Big Hutch and I, gaming has always been a part of our black nerd experience. I know we went outside and played sports and went to school, but most of my 80's memories are tied to gaming in our house( and professional rasslin') Even today, I have a son who loves games and we do retro gaming nights every Tuesday on the Playstation 2.  To see my son play Pac Man, Joust,  and Root Beer Tapper always brings a smile to my face and allows he and I to connect on a different level as father and son.

So what was your favorite 80's gaming system?
Leave comments in the comment section or follow us on FB or on Twitter and leave a comment there!
Or take the poll at the bottom of the page!

Posted by Brothascomics at 8:56 AM