*** this article will deal with the original team of Alpha Flight not the many failed restarts of the book and the teams which were undeniably terrible.

You can check out all X-Men history with Alpha Flight in the X-Men the animated series. They do it in 22 minutes!


Happy Canada Day!  I do not know what that really means because I am an American but it seems to be very important.  From a comics perspective, tho, I wanted to look at the original Alpha Flight- which some described when they debuted as Canada's answer to the Avengers.  Werd?  I wouldn't go THAT far but they are definitely Canada's answer to the X-men and that is where we start!

In the late 1970's, John Bryne( artist) and Chris Claremont were in the middle of their fantastic run on the X-Men.  Claremonts writing and Byrnes super clean artwork made the book a must read for comic book heads then and even today when you are looking to see classic X-Men stories.  During that run and fleshing out the character, Wolverine, they introduced Guardian( known as Weapon Alpha), as a member of Department H and the military division in Canada that was in charge of their superheroes.  In that process, Wolverine left Department H and Guardian was sent to retrieve him and bring him back to the team in Canada.  Naturally, Wolverine refused and we get this battle between Weapon Alpha and the X-Men issue 109. This is our first appearance of Guardian( James Mac Hudson) and the first mention that there are Canadian superheroes. 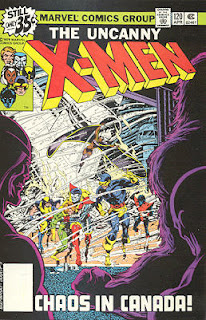 A few issues later, the X-men are headed back from Japan after defeating Moses Magnum and a strange snow storm forces them to land in Calgary, Alberta, Canada.  Now, Weapon Alpha is going by the name of Vindicator and his team, called Alpha Flight confront and fight the X-men. The team of Alpha Flight at the time consists of:

Quite a formidable team. and they give the Xmen all they could handle over issues 120 and 121.  Of course, Wolverine does not join Alpha Flight( well he does but he doesn't) and the X-Men defeat Alpha Flight and leave Canada to head home.  Then Alpha Flight disappears for a few years.  As Byrne and Claremont are about to end their run on Xmen, Byrne is offered the chance to write and draw an Alpha Flight on-going series and in 1983, the book Alpha Flight debuts 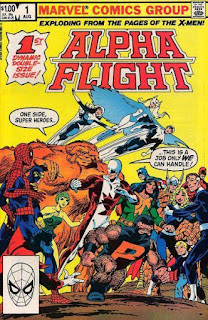 Now if you read this book in the 80's, you know that it looked great but the writing was terrible.  Villains make books( and movies) and Alpha Flight constantly struggled to find villains worth fighting.  There was the military they had problems with and Beta Flight which was essentially their doppelgangers.... It was not great and the book suffered. The best bet would have been to get in a writer and have Byrne just do the pencils but they didn't do that.  Instead, they go for an " aw shit" moment and kill Vindicator ( but remember its comics, nobody stays dead) in issue 12
The team still does exist mostly intact from the original group.  Northstar is a member of the X-men now but his sister is still in Alpha Flight, along with Sasquatch, Snowbird, Vindicator, and Puck( who joined the team when the book debuted).  In fact, they just had a great run in Amazing X-men beginning in issue 8 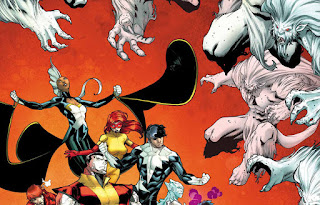 So Happy Canada Day to our friends up north.  I hope the day treats you better than Marvel has treated Canada's favorite( and only) super team

Posted by Brothascomics at 5:39 PM