Is it worth a Redbox rental: Ex Machina 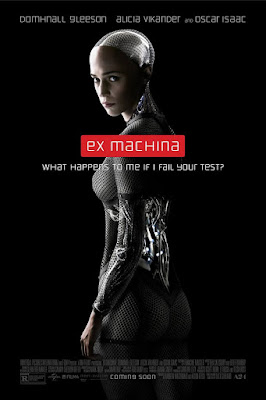 This week's movie of Is it worth a Redbox rental is Ex Machina.  I am going to need to be very careful with this review without spoiling too much of the movie.  In a phrase, "hell yes" this movie is well worth your $1.50.  This is probably one of the better sci-fi movies I have seen in the past 3-5 years.  I label it sci-fi but its probably more of a psychological thriller than a standard sci-fi flick.

The premise of the movie is based on the singularity.  This has been touched on by every movie and television show that fools with AI, or Artificial Intelligence.  The singularity is when robots, or machines based in AI become more wise than their creators and begin to make changes and possibly eliminate and replace their human creators.  You saw this in the Matrix,  I, Robot with Will Smith and if you are not watching Humans on A&E, you should be,

The movie deals an eccentric billionaire named Nathan,  who has created an AI robot named Ava and he needs someone to test her abilities in interacting with humans.  The billionaire picks a coder from his company, named Caleb, and fly's him out to his remote compound where he works on his machines. Caleb and Nathan have a complicated relationship on how to test Ava properly and once Caleb begins to test Ava, Caleb finds her interactions beyond AI and that she has fully reached the singularity.  So much so, Caleb finds himself falling in love with Ava and begins making decisions while in his feelings.  All the while, as you are watching, you are not sure who is actually controlling the puppet strings.  Again, I do not want to give away too much because it would spoil the movie.

So I highly recommend this movie.  This is not for the kids!  Lots of bad language and nudity galore so keep the young ones away.  But if you are a fan of this genre, this is a great movie and well worth a Redbox rental.!

Posted by Brothascomics at 7:53 PM