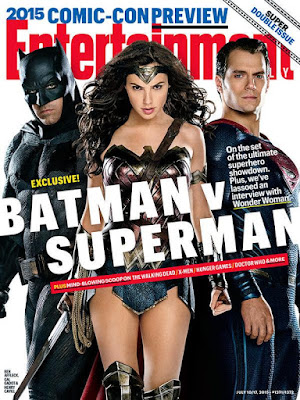 As DC is getting the big room all to themselves at comic-con this week, so much information is coming out about Batman V Superman.  I thought it was great to see Wonder Woman front and center on the cover of EW this week.  From reading the articles, it seems that she has a prominent role in this movie and is not just in a cameo/guest appearance.  There was the picture of Bruce and Diana Prince and information from the numerous articles out stated that she knows Bruce is Batman so that is an interesting choice on how their relationship will proceed moving forward.  So good for DC and I hope they do not disappoint this week; although they are really competing against themselves! 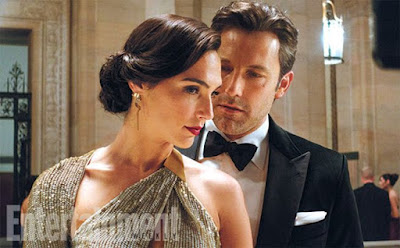 One of the more interesting things coming out in all this hype by DC is that the director of Batman V Superman and Ben Afflek as well were stating that they DC movies are different from the Marvel movies in that they are more " realistic".  Werd?  This got me to thinking about this and I am not sure if I can roll with that.  Look, they are trying to distinguish themselves from a pretty crowded market of comic book movies and they have to bump their product because no one else will- I get that!  But they should pump the breaks on "more realistic".  These are comic book movies- none of it is realistic.  This is fantasy and make believe- none of it is realistic.  I think DC and their fans fall back on that argument because of Batman. And Batman should be their most realistic hero because he does not have any superpowers.  If you go back and look a the Dark Knight trilogy, it does have a grimy, realistic feel to it because the hero is so grounded. Batman's tragic backstory plays into that and they have made that moody, emotionally detached version of Batman cannon for the character moving forward.  This is the natural overreaction to the campiness of Batman and Robin and no one wants to go back to that version of the Dark Knight.  So I get where people are coming from... with Batman!

The ending of MOS


Affleck on difference between DC and Marvel movies

But, the other DC cinematic movie is Man of Steel.  Um, there is nothing realistic about that movie or the character- no matter how hard they try to "Batman" him up.  Yes his dad died and that is tragic but he is still a super powered ALIEN with god like powers.  No realism there.  The director of MOS and of BvS, Zacj Snyder stated that the ending of MOS is realistic in t how they are dealing with the destruction caused by Superman and Zod at the end of the movie and that is one of the reasons for Batman getting involved in all of this.  Ok? I guess that makes it more realistic but that wont make your movie any good. Look, people that watch this movie don't care about that! No more than they cared about taxation of trade routes in the Phantom Menace.  People want to see Superman being Superman and there is nothing realistic about the character.

I wrote about this before in that DC maybe needs to power down some of the other Justice League folks to give their movies a more grounded feeling but maybe I was wrong.  If they are going there with Justice League, then maybe they need to go all out.  Each super with their super powers batting powerful super villains.  That would make them distinct from Marvel!  If you wound be a ying to the yang and distinguish their properties from Marvel in a positive way.  How would the public receive it?  I don't know but copying the Marvel way may not be the best formula for success for DC!

I am so back and forth on this movie.  I liked the Dark Knight but I though the rest of the Batman trilogy was balls. I thought the concept of MOS was OK but the execution was heavy handed and was rushed to conclusion.  I know people are gonna lose their minds from the trailer this week and good for them but I caution you( and myself) that trailers makes all, well most, movies look good.  I am hoping for the best when this movie comes out because if done properly, it will be great to see these characters on the screen and to eventually see a Justice League movie.  I am just not sure if DC has the patience to pull it off because they want it so bad.

-The Producer
Posted by Brothascomics at 1:18 PM