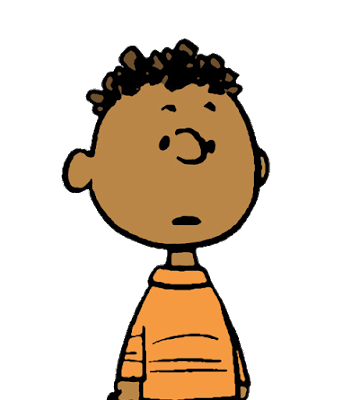 It is?  Did you know about this? Did you get the memo?  I did not get the memo!  The people who run Peanuts now have officially declared today, National Franklin Day to celebrate the 47th anniversary of Franklin being put into the Peanuts comics strip.  This pre-dates my birth by a few years but, obviously, I am aware of Franklin and his contributions( which are few and far between) to Peanuts.

The comic strip appeared 47 years ago where Charlie Brown first meets Franklin at a beach vacation back in 1968.  Now I know to some of you younger readers, this might not seem like a big deal.  But to many white people, this was a huge deal to have a fictional  black character interacting with a fictional, yet beloved, white character in comics.  Charles Schultz, the creator of Peanuts, received death threats and hate mail for doing this back in the 60's and those letters continued until his death in 2000 from people who felt that integrating comics was wrong.

Now you would have to know me very well to know this, but I am a Peanuts junkie- at least until 2000 when Charles Schultz died.  Growing up, I read all the books, the comic strip everyday, and of course all the holiday specials from the Great Pumpkin, to the Charlie Brown Christmas Special.
Those cartoons are really a calendar to my life in many ways.  I knew it was fall when the Great Pumpkin would come on.  I knew it was Thanksgiving when the Thanksgiving special was coming on.  Hell even Valentines Day and Easter had Charlie Brown specials and much of my year was just looking forward to the next special.  That's not including the movies!  I died with Charlie Brown when he spelled b-e-a-g-l-e wrong and lost the spelling bee in A Boy Named Charlie Brown! I watched Race for your Life Charlie Brown every summer! Never ask Big Hutch about having to watch Bon Voyage Charlie Brown( and don't come back) because I watched it so much I broke the VHS tape.  And for the love of all that is holy, I cried my eyes out at Snoopy Come Home and if you didn't, you are a liar or a damn robot who has no feelings! 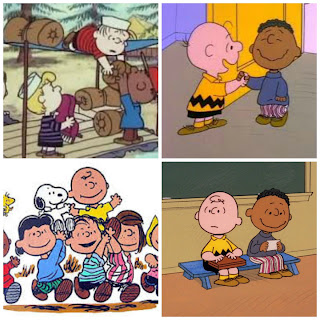 So why, 47 years later, is Peanuts giving us a National Franklin Day for a character that they barely acknowledged in the entire mainstream run of Peanuts?  Oh that's right, they have a movie to promote and there is money to be made.


If you have not heard, Fox is rolling out a Peanuts movie to try and introduce these characters to a new generation of kids.  And of course, you need to recognize that the comic strip, while loved by many, including myself, is not exactly diverse in its presentation.  So Franklin gets a whole day dedicated to himself ahead of the movie.

Word? Really?  Look, I'm black and Franklin is not my favorite Peanuts character ( I'm a Linus guy myself).  And why would he be?  He was placed so far in the back or separated and not given any chances to shine as a character. When you read the comic strips, you get to see a bit more of him and his character( he really is essentially a black Linus) but most people didn't read the books or the strips.  They are familiar with him from the tv shows and specials.  And if you don't think there was a division on how to deal with him, look at this from the Thanksgiving Special.

This is pandering at its best and the movie industry always looks for a way to try and bring in diversity when there is a chance to make or lose money.  And  I'm not mad at them for doing it.  They need to promote their product to a wide audience and they are doing what they feel is best.  I wont be surprised if a Latino Peanut character shows up or an Asian character or even a Gay character.  They want to cover every possible base to make as much money as possible.  And that is okay. Peanuts needs to be more diverse.  But don't make up shit to call attention to something you never paid attention to before.  It's insulting!

So Happy Franklin Day! I am confused tho! Was I supposed to come to work today?  Is the bank open?  Is Publix open? What food should I make for Franklin Day? Will there be mail delivery today? Are only black people supposed to celebrate this day? Are we to play hockey or center field like Franklin?  Or maybe breakdance like Franklin did in Flashbeagle? Or maybe we need to quote the Old testament like Franklin has been known to do. I really don't know how to act on Franklin Day!  Maybe next year they will give us the heads up ahead of time so we can plan  accordingly and know what to do!

Posted by Brothascomics at 3:38 PM