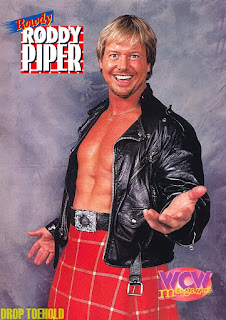 Today we lost a legend in the rasslin' business in Rowdy Roddy Piper.  Piper died today at the age of 61 from a heart attack! That is very young and my heart goes out to his family and his fans.  I was never a fan of Piper and thought he was very overrated once he made it to WWF/WWE.  I remember him from the Georgia Championship Wrestling days as a commentator and a pretty good wrestler feuding against Wildfire Tommy Rich!  But once he got with Vince he became a brawler, non wrestler and damn near incoherent on the mic once he really got going.

My in ring memories of Piper begin mostly with the Rock and Rasslin Feud involving Cyndi Lauper and that feud ending with the tag match at Wrestlemania 1 with Hogan and Mr. T VS Piper and Paul Orndorff!

Piper is probably best known for Piper's Pit- his pseudo talk show where he interviewed talent from the WWF.  Piper was playing heel and would antagonize all the babyface wrestlers which would lead to feuds or advance feuds for other superstars.  It often led to brawls on the set of Piper's Pit as an excuse just to destroy the set.  One of his biggest feuds was with Jimmy "Super Fly" Snuka.  In a series of Piper's Pits that led to their feud, Piper was heeling on Snuka pretty hard. So much so, it became racial.  Very racial!  Its actually kind of uncomfortable to watch now!

And I bring this up in light of what happened with Hulk Hogan last week.  The rasslin' business is quite possibly one of the most racially insensitive businesses on the planet.  The WWE has waded in racial story lines for years to get heat for wrestlers or for feuds.  That's why its no real surprise that Hogan said what he said because he's in a business that promotes and glorifies racial issues for money. It always has and I don't see that changing anytime soon.  Hell the Rock, who is half black, came out and said Hogan was "talking trash".

What the fuck are you talking about Dwayne?  Hogan wasn't talking trash.  He was speaking truth from his heart because that's how he felt! Look, the best wrestling feuds have always been based on some truth between the wrestlers.  Whether is disrespect, how well they work, something personal, or even racial issues, this real life heat, helps sell the feud.  So, why I feel for Roddy Piper and his family, fans, and friends, Pipers Pit is a sad reality check on how bad racial issues are and were in the WWE.  I'd like to say they've come a long way since then, but we all know that is not true!

Posted by Brothascomics at 12:16 AM