Based on the reviews thus far, it looks like The Fantastic Four reboot is not doing well with the critics, it has a 10% on Rotten Tomatoes. Apparently this is not the movie that the director meant for the public to see.  In reading the statement from director Josh Trank, he said that he was not responsible for the final cut of the film, therefore, the movie that was distributed was not the one he intended to make.  He stated that “A year ago I had a fantastic version of this. And it would’ve received great reviews,”  “You’ll probably never see it. That’s reality though.”  It sounds like his creative control was usurped by the studio and he is not happy about it.

Trank was scheduled to do a Star Wars spinoff film for Disney, however, he has left that project.  He said his departure was because he needed a break from high profile movies.  His statement,  “I want to do something original after this because I’ve been living under public scrutiny, as you’ve seen, for the last four years of my life,” he said. “And it’s not healthy for me right now in my life. I want to do something that is below the radar.”  There was speculation that he was fired from the Star Wars project due to erratic behavior on the set of Fantastic Four.  However, he emphatically denies this and states that this has all been spun in malicious way.  Whatever really happened, it sounds like there is a lot of bad blood between Trank and the studio, which probably will not bode well for him with future projects.  It is a shame, because I would like to see the movie that he intended to director instead of the one that the studio put out for distribution.  The budget was $120 million and expectation at box office is $40 million. 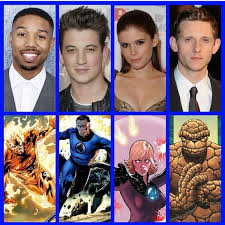 I was silently rooting for this Fantastic Four, because the other movie versions had a lot of potential but floundered it.   However, not just for that reason, also due to the fact that this movie received so much flack for replacing the Human Touch with an African American actor (Michael B. Jordan), there were a lot of people who wrote it off for that reason alone.  So, henceforth, I wanted it to succeed.  It doesn't look like that will be accomplished with this movie.  Unfortunately, it will probably be blamed on that reason alone, the replacement of a character that was white in the comic books with a black actor.  A lot of people just couldn't handle that.  That speaks to where we are as a society, sad but true!


The Female Perspective
Posted by Brothascomics at 2:24 PM