Posted by Brothascomics at 5:33 PM No comments:

We Watched it For You: Game Night 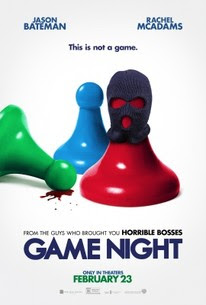 As Black Panther continues to dominate the box office domestically and world wide, studio's still need to offer up counter programming for people who have no interest in seeing a super hero movie or those who have seen the movies 3 times ( me).  Warner Brothers jumps into the fray with Game Night-comedy counter programing starring Jason Bateman and Rachel McAdams as a couple who met at trivia night, fell in love, got married, and are looking to have a baby.  The problem, and this is quite a stretch in terms of plot, Bateman's characters sperm is having a hard time and his Dr and his wife link this to his unhealthy sibling rivalry he has with his brother, played by Kyle Chandler.

The movie plays out on a game night hosted by Chandler's uber successful character as he attempts to take Game Night to a whole new level.  Gone is the idea of charades, Scrabble, or Pictionary- no he hosts a Game Night in which a real life kidnapping will happen and each couple will need to figure out how to rescue the kidnapped person.

Of course, shenanigans reign supreme as Chandler's character is actually involved in some shaky business deals and is legitimately kidnapped and its up to Bateman and McAdams to solve the mystery and rescue his brother.  There are many B plots surrounding the other couples on Game Night, there is a creepy neighbor/cop, and the movie tests your limits on who is in on the game and who is not.  The movie borrows heavily from Date Night, the 2012 movie starring Tina Fey and Steve Carrell as a couple who gets themselves overly involved in something criminally unexpected.

Overall, a fun date night/ Game Night movie.  I would probably reserve it more for a Redbox rental than an actual date night, tho.

My interview with Greg Land at Comic Con Revolution in West Palm Beach, Florida.  He talks his upbringing in comics and he breaks X-Men comic book news... you heard it hear first!

Posted by Brothascomics at 3:49 PM No comments: