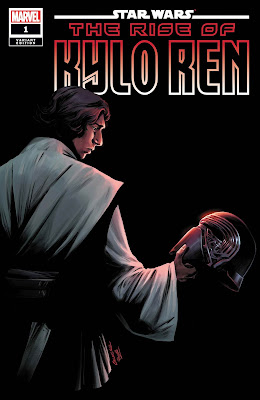 I have stayed out of debates about the last two Star Wars movies: The Last Jedi and The Rise of Skywalker.  The former, so many people love or hate it that there is no real chance to have a credible discussion about it if you felt it was just, meh.  The latter, I just did not enjoy but people are really having too much fun dragging the movie and Star Wars fan culture has really become toxic with so called "fans" gatekeeping the franchise.  This last trilogy went out with a wimper after such promise after the Force Awaken and I find myself wanting my Star Wars fix outside of the movies.

So a quick trip to the local comic book shop and I was able to pick up The Rise of Kylo Ren by Charles Soule and Will Sliney I was drawn to the book by the title mostly because after introducing the idea of the Knights of Ren in The Force Awakens, the group and the purpose was thrown out and all we got was more and more Kylo without any reasoning as to why HE was a Knight of Ren.

The Knights of Ren are hunting the galaxy for those like them.  I would say they are all Force Sensitive; leaning into the Dark Side of the Force and looking for those with those same sensitivities.  There is a scene where they meet two brothers who may fit the job description but it doesn't quite work out for them. 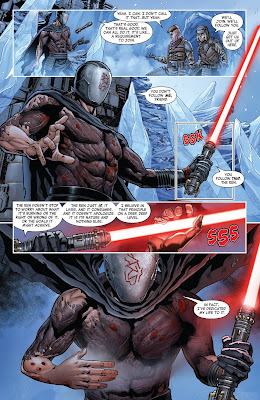 This book picks right after Ben has turned on Luke for trying to kill him.  The book dives into a sidetail, tho as now that the Jedi Temple is burning, Ben is confronted by 3 Jedi in training who are curious as to why their masters house is burning down. There is a lot of discussion as to who is a Jedi, who is stronger, and to the valor and character of Luke Skywalker, who is believed to be dead.  Alas, as the Jedi in training look to confront Ben with some Jedi Justice, Ben leaves them in a heap as he is clearly the strongest of the group of them. 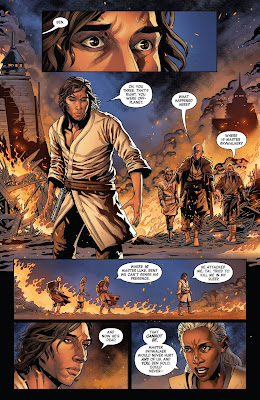 As Ben is ready to leave, he takes a ship and his destination is unknown.  However, are three Jedi in training are looking to get Justice for Master Luke Skywalker and give chase in their own ship.  They have to remind themselves that Ben Solo's father was a great pilot, as well as his uncle and grandfather so confronting in space battle might not be the wisest move of the Jedi.

Meanwhile, Ben's robot companion suggest that Ben go home to visit his mother.  Not in the plans, tho as Ben begins to hear a voice in his head that suggests that Luke turning on him was all a part of a master plan that had been predicted and that voice belongs to Snoke.  He does not appear like the Snoke in the movies and you have to wonder what tragedy will befall him to turn him into the crusty crumedgon that we see in the Last Jedi. 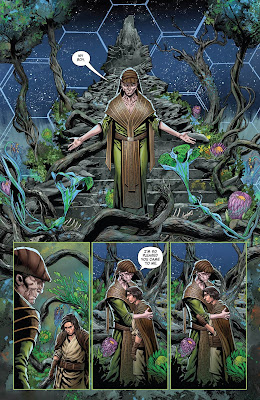 Overall, this book is fun and gives you just enough back story to want to come back for more next month.  I often feel the Star Wars comics are a better vehicle for the Star Wars universe because its not bound to trilogies.  The comics take their time and interweave movie cannon with relatable stories with characters you love, or love to hate, like Kylo Ren.

Soule and Sliney do a wonderful job here and help unravel the mystery of the Knights of Ren and their most famous disciple.  Highly recommend this book for Star Wars fans who are not huge fans of the current movies. 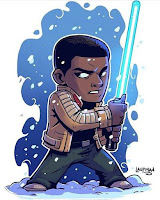 Posted by Brothascomics at 8:52 PM No comments: 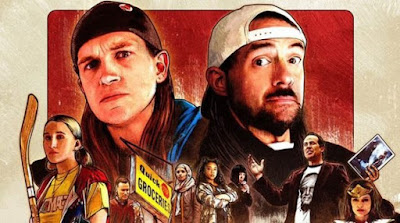 I feel everytime I write about Kevin Smith I wind up having to defend my fandom of Kevin Smith.  In the 90's and early 2000's, I was a huge Kevin Smith fan.  I obviously own all the movies, I have listened to the director's commentary on all the DVD's, I supported the Clerks: The Animated Series, and would argue to the death with people on the greatness that is Chasing Amy.

But there comes a time when I grew up and I thought Kevin Smith would, too.  If you listen to the commentary track on Jay and Silent Bob Strike Back, Smith is very clear that this movie would be the last you would see of Jay and Silent Bob and that he was moving on to bigger and better things.  And I felt that this was the move.  At a point, dick and fart jokes have a shorter self life and you and the characters you created need space to grow.  And I was all in with Smith and his first post Jay and Bob film, Jersey Girl, I saw in the theater with my wife.  Whether you liked the film or not( I did), the movie was a chance for Smith to spread his wings as a writer and director.  The film was not a box office success and there are probably a variety of reasons for that; most notably Bennifer( Ben Affleck and Jennifer Lopez had become toxic in Hollywood at that point). And not surprisingly, Kevin Smith got spooked and scared and retreated back to what he knows best. 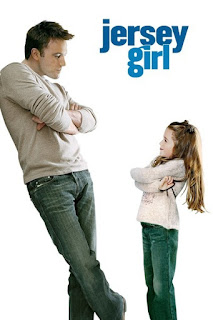 Now look, certain people in Hollywood do this all the time.  They find a lane/genre and stay in that lane for the bulk of their careers.  How many bumbling idiot Adam Sandler movies are there?  Martin Scorcesse is still making gangsta movies, and don't get me started on Tyler Perry making oppressed Black women movies for the entirety of his career. However, staying in ones lane doesn't offer much room for growth as a filmmaker, and Kevin Smith's work post Jersey Girl is filled with underwhelming raunchy comedies like Zack and Miri Make a Porno, to safe place films like Clerks 2.  And his two forays into "different" movies were odd at best with Red State and Tusk. 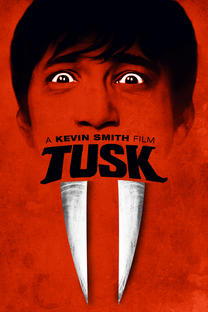 Which leads us to Jay and Silent Bob Reboot.  Now if you are a fan( and again I am), you know this movie and the podcast that proceeded it, Jay and Silent Bob Get Old, are really a congratulations for Jason Mewes.  Mewes struggled mightily with drugs in the late 90's and 2000's; to the point where it was even reported that he died.  Smith, hoping to keep his friend straight, offered up the podcast and if he stayed sober, a chance to star in another Jay and Silent Bob movie.  Thankfully Mewes has been clean and this movie is the payoff.

The problem is its just not a very good payoff.  Look, I saw Clerks in my 20's and now I am in my late 40's. And the thing is, I love a good dick and fart joke but those jokes have to be earned.  It can't be going for the cheap laugh at every turn and this movie does that.  The writing isn't smart or clever and literally many of the jokes are lifted from the previous movies.   While its great to see Jason Lee, Ben Affleck, and even Joey Lauren Adams, it just feels tired and uninspired.  The plot is nonsensical, with Jay and Bob headed to Hollywood( again) to stop the reboot of the movie made about them 20 years ago. So the movie becomes a Road Trip movie as Jay and Bob reconnect with characters from the previous movies; which essentially happened in the OG Jay and Silent Bob.  Look, there is something to be said about your life coming full circle and gaining proper perspective in your life as you get older. And you see glimpses of that in the film with Jay and Bob,  but only glimpses as the movie just moves on from one celebrity cameo to the next never allowing itself to become anything more than Kevin Smith and His Amazing Friends.

No one.  Absolutely no one is going to watch a Kevin Smith movie and expect to be blown away by his filmmaking or artistry.  You go to see characters that you grew up with have fun and do and say stupid shit that you used to say when you were dumb and said stupid shit. And if you love Kevin Smith and all he does, I am sure you will love this movie.  But if you are like me, someone who loved Kevin Smith, you will watch this with a sense of nostalgia and sadness watching someone who has not only not left childish things behind, but has refused to grow up in a way that would be meaningful for himself and his beloved characters.  See you around for the Clerks 3 and Mallrats 2 reboots! Snoogin's! 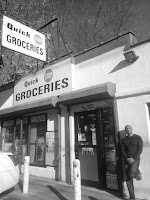 Posted by Brothascomics at 5:29 PM No comments: