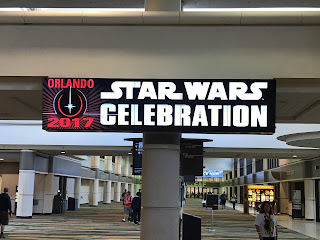 Every now and then you have to say F it! Damn work at least for now, i'm going to enjoy myself. This is the sentiment I ultimately came up with when making the final decision to attend Star Wars Celebration 2017.

But before that let me properly introduce myself. I'm Sandman, contributor and frequent podcaster here on Brothascomics. You've probably heard me on the Comic Book Chat podcast. (Probably not) But whatever. That's not really important. What is, is that i'm a geek, nerd or whatever other superficial derogatory term you can come up with describe a lover of comics, anime, games and any other fanboy multimedia. That definitely includes Star Wars. Truth be told, back in the day I didn't even see the original movie, Episode IV until Episode V was about to come out. And before yall ask yes I am that damn old. But I've been a fan ever since, so when they announced that Celebration was coming to Orlando this year, the small berg I happen to live in, there was no way I couldn't show.
As usual, life made a valiant try to ruin my plans. We're all familiar with them, work, money, and good ol apathy. However if The Producer himself was coming from out of town to enjoy this thing, what excuse did I really have. Decision made. Let's go. 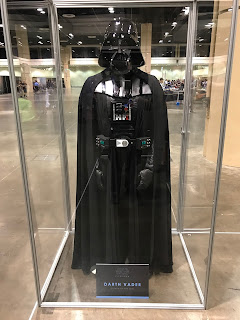 First off, I don't know if you've ever been to the Orlando Convention Center, but its big REAL big. There were no less than 3 gigantic convention rooms dedicated to Celebration. One of them was dedicated solely to the fans that camped out for the main show stage the night before. Thats not a new thing if you've frequented some of these Cons, but the sheer number of people was staggering. It just so happened that when I met up with the Producer and his daughter, they dropped the live trailer of the Star Wars: The Last Jedi. 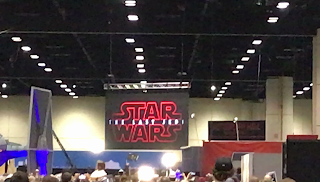 I'd never been a part of something so big and so anticipated by people all over the planet. And to know that you're one of a select group of people on said planet to see it first! As corny as this sounds, the energy in the room was palpable(wow that's close to Palpatine isn't it?). Its the kind of excitement that can only happen when you're on the floor live. Sure 6 billion other humans saw the same video seconds after we did. But we were first dammit! 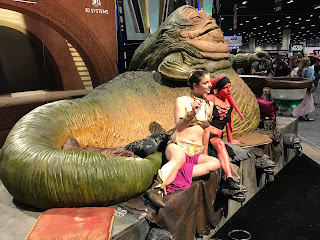 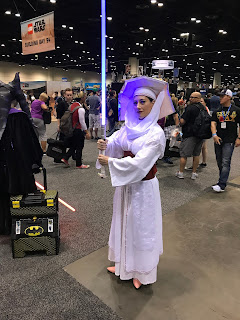 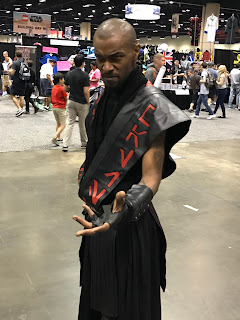 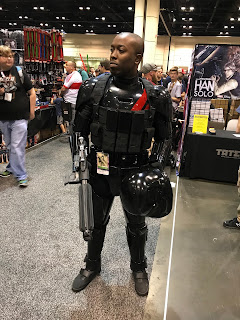 Speaking of fans, man you cannot believe the level of cosplay at this thing. Again, its a normal thing at cons but the dedication to the craft and level of fanhood always kills me. I mean look at this stuff. You ain't picking up these things at Walmart bruh. I play a lot of Star Wars: The Old Republic and I could pick some of the costumes faithfully reproduced from the game. Then again any less would've been disappointing wouldn't it?

Oh and I got to show y'all some of these crowd photos of this thing, here's ONE of the food court areas. 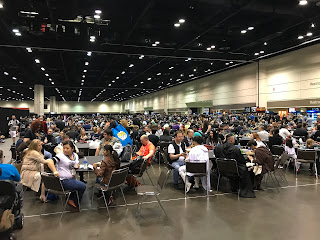 And here's a shot from outside in the main hall: 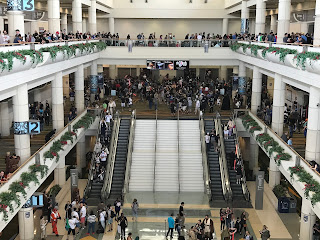 I wont even mention what the line to the official store was like. Being that this Orlando lets just say it was an E-ticket. You youngsters ask your parents what that means. I talked to people from Australia, England, you name it. I really was at awe of the number of people that showed to this, and that was just one day of four. This was an spectacle. One I'm very glad I didn't let pass. To officially wrap this thing up, don't let life bully you out of having fun. When the circus comes to town take in the show. Especially when the clowns are packing lightsabers.

May The Force Be With You 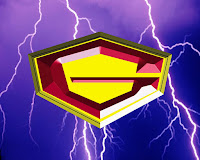 Posted by Brothascomics at 8:02 AM No comments:


From Ruby Dee and Ossie Davis: 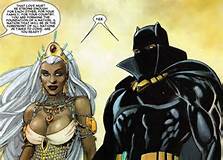 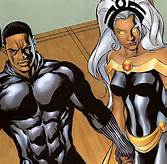 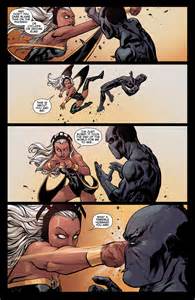 Can't two fictional black folks get along ?? I know the Black Panther gave Storm the Annulment. I know Storm put together her revenge body and bad mouthed the King to Kitty and Oprah. But Dammit I know somehow, someway, these two can get back to the love they have for each other.  Can't Captain Negro Falcon throw a House Party and invite these two by mistake (not Really). It works in the non -Tyler Perry Movies!!

Batman got yoked by Talia with this method. Surely T'Challa doesn't want to be on The Muray Show trying to deny it

Please Don't meet at the 7-11 near Xavier's Mansion every two weeks and exchange the kid and his pampers. Do the right thing and live together for the child's sake. Marvel work it out! 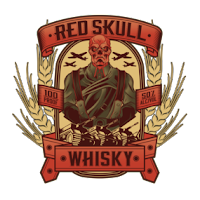 
This year marks the 32nd anniversary of the GA Renaissance Festival, of which we were in attendance.   Hutch and I make an attempt to attend this festival every year, simply because we think it is fun & interesting.  As a matter of fact, we were just discussing the very first Renaissance Festival we attended in Ohio.   This memory is a very controversial one because this was the first time either of us had attended this event.  We had no idea what to expect.  Mainly me.  I attended the Ren-Fest wearing all white attire with heels, which is totally inappropriate for this venue.  If you know anything about these festivals, you know they are filled with dust and dirt, because most of them take place in the boonies in a field somewhere.  Needless to say, by the end of that event, someone was not a happy camper.  You are probably asking why I would wear such an outfit?  Well, this mainly occurred because the other said party, did not tell me where we were going in the first place.  Anyhow, that began my fascination and appreciation for the Renaissance Festival.


I have been attending the Ren-Fest for probably the last 7 years or so, give or take a few.  Each year it tends to expand and become more diverse.  I remember when we first started attending, there were maybe a few, as in less than 5, people of color.  Now the attendance is very diverse.  Encompassing of all different ethnicities and backgrounds.  Also the vendors have changed to cater to a more diverse audience. 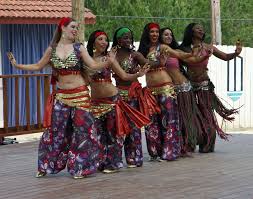 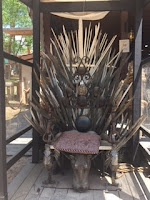 I have to think with the popularity of movies like The Lord of Rings, Harry Potter, The Hunger Games and Game of Thrones, there has been a major influx to these type of festivals.  Those movies have opened the gates to a much wider and more diverse audience to these type of events from people who might not normally be interested in attending these festivals.  It is interesting to see how much these festival have grown from when I first started attending. 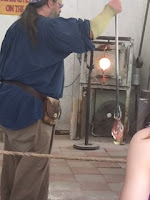 There is also various shows and activities that cater to role playing and various creative ventures of the time period.  One in particular that I tend to enjoy is the glass blowing demonstration that I always find fascinating.

Also, I make a point to get a goblet each year to commemorate the festival.

I am sure there will be more growth and diversity in the coming years.

Here’s to 32 years of GA Ren Fest and may there be many more to come.

Posted by Brothascomics at 9:49 PM No comments: