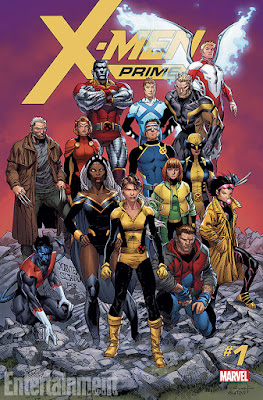 X-Men Prime is the new jump off for the X-Men comics.  As Marvel has finally come to its senses and decided to invest fully back in their mutants and slow down the unnecessary push of the InHumans. This issues serves as a starting point for a few of the new books and teams and actually does a good job of giving new readers a point to join in without too much continuity concerns.

Before I get off into my review of this book, let me just state for the record: I do not like Kitty Pryde.
Ok, let me revise.  From her introduction in X- Men 139 until Joss Whedon handled the character in Astonishing X-Men, I did not like Kitty.  To me, the character was not interesting or useful for so many years.  I just came to despise her and her mammi relationship with Storm.  There was no redeeming her for me until Whedon took the character.


That being said, XMen Prime brings Kitty back to Earth and back to the XMen.  For the past few years, Kitty had been travelling with her husband Star- Lord and the Guardians of the Galaxy.  Like most relationships in comics, shit didn't work out, and Kitty is now having to start life over again as a divorced women.  I think in another world, that is a comic I would like to read.  Like how would a divorced mutant who lived in space come back to Earth and readjust. 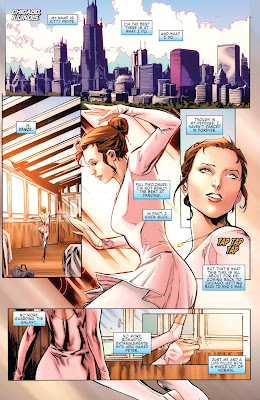 Alas her time alone in Chicago is short as Storm appears with an offer for Kitty to come back to the Xmen.  Kitty has only been partially following the adventures of her former life( I guess space Internet is slow) and Storm is full of regret for how she handled the XMen VS INHumans conflict.  Storm presents Kitty an offer that Kitty really is not in a position to refuse. 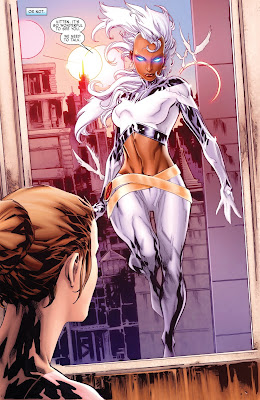 Again, this book is a launching point for the restart, or X-Resurection of the X-Men titles.  The book shifts to a scene starring Lady Deathstryke ( who is now officially Kelly Hu from X2).   She is confronted by a nefarious character and there is a short battle in which she is captured.  Lady Deathstryke will be a star in the New Weapon X book( coming soon to a comic shoppe near you) 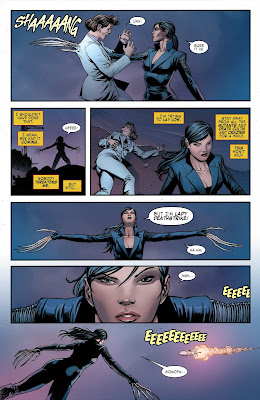 The book shifts back to the X-Mansion as Kitty is confronted with her past with the other Peter in her life.  There is a great collage of their former life together- including the time he told her he fucked that lady on Battle Planet in the OG Secret Wars. I am sure we are going to revisit this romance in this new X-Men as well. 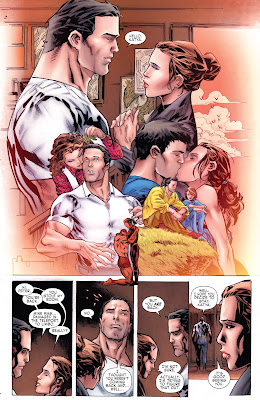 Also in the X-Mansion is the time displaced, original X-Men.  Now led by Jean Grey, this team is not what it seems to be as they fight off robots in the Danger Room. To be honest, this is my favorite set of X-Men since the debuted. Jean leading the team makes sense, even tho how they were brought to the main continuity line still doesn't make sense.  Regardless of that, they have their own branch off moment in X-Men Prime and Kitty has to deal with it. 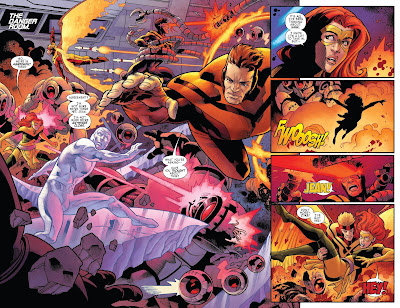 All of these events colliding together, causes Kitty to seek out her closest friend in the X-Universe, Majik.  They discuss the X-Mansion being in Limbo and Kitty calls a Family Meeting to have all the X-Men come together to talk the future of the team and where they are headed. This is a wonderfully drawn scene and really pulls at the family aspect of the team that has been ripped away in recent years as they focused on Cyclops' shenanigans. 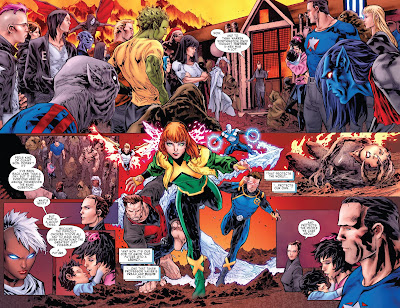 The Decision is made to move the X-Mansion out of Limbo and into Central Park and the book ends with previews of all the new X-Books coming out.

Overall I enjoyed this book. I have not been a fan of the X-Men comics for a while now and had been reading them off and on for the past few years.  The unsaid/unconfirmed drama between Marvel and Fox over the characters had seemed to affect the quality of the books.  The deconstruction of Cyclops took the book and characters I grew up loving into a place where I didn't even recognize them anymore.

X-Men Prime is a good step to fixing that.  X-books need to focus on the main X-Men we love. Enough with the Gold Balls of the world.  Nobody cares about him or most of these other new mutants you have created in the past seven years.

Great Start and I will definitely be following X-Men Blue and Gold!

Posted by Brothascomics at 10:47 AM