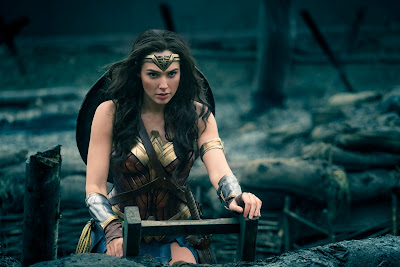 This past week, some long range projections have Wonder Woman opening around $83 million when it open in June.  That opening would be the lowest of any of the recent DCEU offerings.  When I first saw the headline, it jolted me into remembering there is actually a Wonder Woman movie coming out this year.  Even tho the movie is about 8 weeks from opening, there has been a notable lack of press for Wonder Woman. DC overloaded us with trailers for Justice League- a movie that comes out in November a few weeks ago. And even tho those trailers featured Wonder Woman, they were pumping up a movie that is 6 months away.  Why is that?  I have a few theories


The Movie is No Good

There is a possibility that the movie is just bad.  Warner Brothers and the DC people have had the movie in the can for a few months now.  Maybe its testing bad and they are attempting to lessen the financial blow by not advertising it fully.  I truly hope this is not the case.  Of all the DCEU movies, this is the one I am most looking forward to.  Wonder Woman was the only redeeming quality of Batman V Superman. The movie has a quality director, budget, and a well beloved character starring in her first feature film.  I would hope DC had their best non Zack Snyder people working to make this an excellent feature.

Even tho its been proven time and time again, movie executives will swear up and down and do all kinds of gymnastics to convince you that movies with women or people of color wont sell.  Its bullshit.  What wont sell is bullshit movies WITH women and people of color.  We are not going to support shit for the sake of supporting shit.  Movies are way to exspensive to just go to for the hell of it.
Yet DC has been shoving Justice League down our throat for the past year.  Even the trailers 2 weeks ago were teasers and then full trailer on top of that.  DC seems to be all in on Justice League- a movie that to me looks rushed and messy already.  But DC loves its white, male heroes and they really love their white, male fans( more on that below). And instead of using Wonder Woman as a springboard to a larger DCEU, they would like us to skip over that Wonder Woman is coming out so we can focus on their true love( which is Batman).

I think this is our winner.  Again, old white movie executives also do not think women attend movies or read comics and that is wrong. Data tells us women make up a large percent the comic book buyers.  On top of that, Wonder Woman is one of the most popular and most recognizable heroes in the world.  From the buzz on Twitter, women( and men) are excited about the movie.  There may be some concerns about the lack of women of color, but there is excitement for the movie.  Yet, there are fewer trailers, no advertising,  no social media presence, and it seems that a movie that is so close to coming out is being forgotten or looked over.

When the most recent trailer did not come out, I was astounded how much Steve Trevor was in it.  I think DC fears( wrongfully) that white fan boys will not come out and see this movie if there is not a white dude in it for them to relate to! Word? Fuck that! You see marketing people are always worried about white males and their fragile egos when they are not represented in something they love.  But Wonder Woman can be successful without white fan boys. The same way Hidden Figures was successful without white men. Market the movie without care of white men.  Focus on the power and prestige of the character of Wonder Woman.  This is why she has been so popular and endured over time.  Symbolically, Wonder Woman and this movie do not need a man to be validated or successful.

When you constantly cater to white male fans, you get shit like Ghost in the Shell and Iron Fist. So now DC is stuck trying to figure out how to market this very marketable character, but making sure they don't offend white dudes.  Its insulting and unnecessary!

And here is the worst part, God forbid Wonder Woman does under perform or worse yet, its not a good movie.  DC and other studious will justify this as a reason to not make movies that highlight women or people of color.  Their rationale will be, " See. We gave you Wonder Woman and you didn't show up".  When the reality is you probably delivered us a shitty movie that you had no faith in.

Sorry Wonder Woman, You deserve better than what DC is giving you right now.  I'll be there on June 2 with my daughter and my son!

Posted by Brothascomics at 11:42 AM