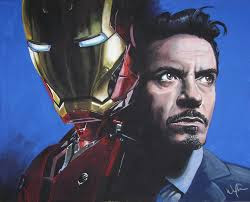 
So news drops today that Robert Downey Junior once again was the highest paid actor in Hollywood last year- making a whopping $80 million.  Most of this was done by getting a huge paycheck for the Avengers with a back end deal that he struck with Marvel.  I know people are bumping up RDJ for this but my take is a bit different.

First we gotta look backwards a little bit in RDJ's career.  I think because he looks kinda youthful still and he's like 5ft tall, that people forget that RDJ has been in the game for a long time. From guest starring roles in teenage comedies like Weird Science and Back to School.  To his most mature role at the time as drug addict, Julian, in Less than Zero. RDJ, even back then, popped off the screen and his personality shined through in every role that he took.  There were rumors of drug use and abuse long before he became tabloid fodder in the 90's and early 2000's.  But Hollywood doesn't care about drug issues and bad publicity as long as you are making the studio money.  And at that time, he was still sorta bankable.  He got his Oscar nomination in 1992 with Chaplin but after that were roles in mostly terrible movies and him cashing checks to feed his drug habit.  What followed in the mid-late 90' and early 2000's were a series of drug arrests, rehab stints, relapses, and jail-cations. 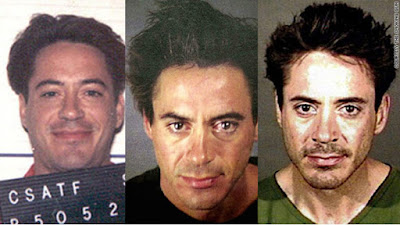 Yet he was still able to find work on tv with Ally McBeal....before he was arrested again and kicked off the show.  But Hollywood loves a comeback story( especially for white actors).  He finally gets himself sober in 2001 and starts that slow trek back to stardom by taking supporting roles in movies and even landing some leading roles but nothing really captured that young, Hollywood star from the 90's. RDJ was working,  but nobody was thinking about paying him top dollar for fear that he may fall off the wagon.

That is until Marvel took a chance on him and cast him as Tony Stark/Iron Man.  Now Iron Man is one of my favorite Marvel Cinematic Movies and RDJ is brilliant in that role.  Probably too brilliant
( I'll come back to this later).  Iron Man becomes this huge hit and 2008 RDJ becomes RDJ again.  He lands huge hits with Tropic Thunder and Sherlock Holmes between 2008-2009.  He has a minor hiccup with the Soloist chasing Oscar gold that year, but his career is back on the upswing for sure. Iron Man 2 is a big hit and a 2nd Sherlock Holmes movie and Due Date all land big checks for RDJ.

He is back to A-List Hollywood status and fan adoration! But along the way, something happened that he probably did not anticipate( at least not initially) You see, after Iron Man and Iron Man 2, and the Avengers, all huge hits for him, there began this slow turn of people not wanting to see him as anything other than Tony Stark.  This typecasting happens with child actors all the time and from time to time you will see it with adult actors as well( ex Liam Neeson, angry vengeful white man; ex Johhny Depp, eccentric weirdo).  Now, people are struggling to see RDJ as anything other than Tony Stark.  His only non Tony Stark/Iron Man movie in the last 3 years was The Judge and the verdict on that was Guilty....of being a bad movie. And I think RDJ began to recognize the shift and its why he negotiated so hard with Marvel for Iron Man 3 and the big ass check he got for from Marvel to do it. He had Marvel over a barrel because fans wouldn't accept anyone else as Tony Stark.  Marvel knew it, too which is why they gave  him those back end movie deals where he made tons of money off the profits of Iron Man 3 and Avengers: Age of Ultron.

Look, I am not knocking his hustle. Make that money, RDJ!  Its great for us fans because he has owned the role and we get RDJ in all the Avengers movies and even in Captain America: Civil War next year.  However, RDJ needs to know that he is typecast now forever as Tony Stark and trying to do these other side angle projects ain't gonna get him any traction with comic fans.  We not trying to see the Judge or the Soloist or none of the other bullshit he puts out. Grow out the beard and put on the suit.  It's made you millions and its what we are all most comfortable with.

Posted by Brothascomics at 11:18 PM