Holding down the Hype on the Force Awakens

Only a couple of shots we have not already seen but worth it.
Only 112 days to go people 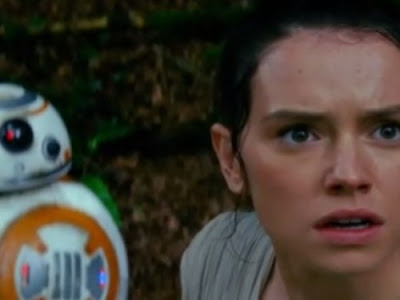 I have been trying to stay away from the hype on this new Star Wars movie for alot of reasons. Reason 1, I am not the JJ Abrams fan boy that most people are.  I like his movies and I really liked what he did with the reboot of Star Trek but overall, I think he is kinda an overrated director and most of his projects are just ok.

Reason 2, I got burned on the prequels.  My hype level for the Phantom Menace was beyond measure and logic.  I was teaching back then and I actually left work on my lunch break to go to Wal Mart and buy toys for the movie.  Then when tickets went on sale, I bought mine early and was so freaked out that someone was gonna break in and steal them from me, I hid them in my Bible- thinking even thieves wouldn't steal from the Bible.

When Phantom came out, my hypeness didn't allow me to see and recognize that it was a bad movie either. I overlooked racist Jar Jar Binks, the terrible dialogue, and that boring as plot about trade routes.  Only George Lucas could make Natalie Portman, Ewan McGregor, and Liam Neeson into bad actors and I defended that movie to everyone( including Female Perspective who hated it from the jump). I even had a bootleg copy after it came out from Turkey with English subtitles that I bought at the Swap Shop in Ft Lauderdale. I was all in on the prequels.

But with age comes maturity and seeing that movie and then seeing Attack of the Clone( which I argue is the worst of the 6 movies) at midnight and falling asleep during it, turned me off from the prequels.  Yeah, Revenge of the Sith is the best of the bunch of the new ones but its still not great either so forgive me if I am a bit gun shy about these new movies.

I worry about the mixing of the old and new characters. I worry that I wont give a shit about these new people because I have no reason to care about them.  We are starting from scratch and that is kinda scary to me.  Maybe Abrams can pull it off and  get a new generation of kids to love and care about these new Star Wars but I kinda have my doubts.

I really hope I'm wrong.  The new clips kinda get me hyped and seeing a black dude with a lightsaber does make get into my feelings a bit! I told the Mrs. I wasn't gonna spend out of savings on new action figures for this movie. I sure hope I can keep that promise.

Posted by Brothascomics at 11:29 PM