Before I get too far into this, let me get out two biases I have.  The first one is, I have never been a WWE/WWF person. I mean I watched it, even went to see Wrestlemania 2 with my best friend, Beavis on Close Circuit TV( look it up millennials), but I have never been a big fan.  When I was younger, it was always very cartoonish and I just never related well to the characters in the WWF.


And as it got more popular, being the contrarian that I am, I didn't watch it out of spite and only watched it to make fun of it. Fast forward to years later during the "Attitude Era" during the Monday Night Wars,  and I was a grown up, I did not watch it because it was a little "too real" and unnecessarily vulgar at times for a "sport" that is really made for kids.

So that is bias 1( I'm team NWA/WCW but that's for another time).  Bias number 2, is that I have always hated Hulk Hogan.  Hate may be a bit strong but I have never liked Hulk Hogan.  I didn't like Hulkamania or the Hulkamaniacs, I hated "Hulking" up! I hated the big boot and his sorry ass finisher with that leg drop!  He epitomized to me what the WWF was and his rarely ever losing made his character even less interesting.  When he moved to WCW, I didn't like that either.  I had a brief moment when he was Hollywood Hogan and NWO but that did not last either.  By that time, Internet Marks were a real thing and we all knew that Hollywood was holding back younger talent and I personally hold Hogan, Bishoff, Hall, and Nash personally  responsible for the demise of WCW( but I digress)!

So when I woke up this morning and saw that Hogan was trending on Twitter and that WWE had removed all his likeness and references from their website, I was curious as to what could have happened.  Then I saw the story about Hogan and his "racist rant" and WWE was acting presumptively to not have Hogan associated with their brand.  Werd? Now the WWE wants to take a stand against racism in the rasslin' business?! Give me a fuckin' break!

Pro wrestling has always had issues with race.  Whether its cultural appropriation by Dusty Rhodes and Jimmy Valiant and and their jive talkin' ways or flat out racist gimmicks given to wrestlers of color, its been around as long as the business. Race has been used to get cheap pops and cheap heat or curry up Jingosim against a country or race.  And WWE led the way as the worst offender and for them NOW to take a stand reeks of hypocrisy.  Granted Hogan's rant was for real and these rasslin' bits are just bits for TV but the line between what is real and what is not real in rasslin has been blurred forever.  People seem to accept that its scripted but still believe in the characters and whatever attributes they have or what is being pushed by WWE.

Let's just look back at some WWE Superstars of color and the gimmicks they were given. I am primarily focusing on African Americans( with one exception) since Hogan went there  Of note,  I stopped watching rasslin in 2003 wi5h the birth of my son so my list may not include newer, more offensive wrestlers Vince has cooked up.  Presented in no particular racist order!

Kamala: The Ugandan Giant/Headhunter
If the name wasn't bad enough, he needed a handler/zoo keeper, he was a cannibal, and was too stupid at times to pin his opponents.


Eddie Guerrero
This is typical Vince, too. Take a smaller wrestler and give him a messed up gimmick to get him over. It worked but the Mexican stereotypes of Lying, cheating, and stealing were awful.  Also the lowriders and Latino Heat


Akeem and Manager Slick
WWE will double down on a racist gimmick like nobody else.  Not only did they turn the One Man Gang  into the African Dream Akeem from "Africa" they gave him a Pimp for a manager named Slick.  So much wrong, so little space to write about it. Also so Vince McMahon!

Virgil:  This one may piss me off most than others!  Virgil is essentially a slave, flunky for Ted Dibiase. He rarely spoke and often it was "yes sir" to Dibiase. WTF?! 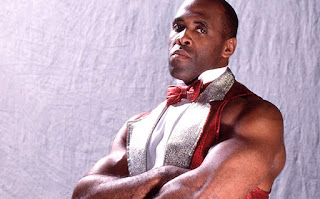 Saba Simba
If you watched mid south wrestling, you knew who Tony Atlas was. He was this bigger than life African American wrestler who was just a brute in the ring.  Not good enough for Vince, tho. What the hell is up with Vince and making blacks tribal?

These are just some the visual examples.  If you listen to the commentary when describing WWE greats like Tito Santana, calling him "Chico" and the stereotypes that Ventura lobbed at him during his matches.  Take any Samoan wrestler( outside of the Rock and even he was Rocky Maivia), and Japanese wrestler, and wrestler they say is from the "Middle East" and you could write an article just on those stereotypes pushed by the WWE.

WWE has never been subtle about using race to advance story lines and create heat for characters.  Which is fine.  They are in the entertainment business, not the moral police.  Which is why this sudden stance by them makes little sense to me.  Yeah, Hogan said his stuff not in character.  He was being himself in a vulnerable moment after getting laid( who engages in such serious post-sex  conversations anyway?) but he is coming from an industry that encourages this type of behavior from the top down.  Why would you think he felt otherwise?


Posted by Brothascomics at 1:59 PM