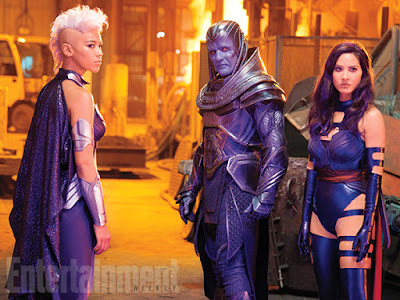 With all these pictures popping up of Storm in Age of Apocalypse rocking the mohawk( I will leave the purple man alone on this post), it got me to thinking about how the mohawk came about.  Because we have cartoons and movies to keep us satiated on our hero fixes, sometimes we forget about the comics that started our love for all things nerdy.

Since I am married, with two kids, my comics do not get a prominent spot in stately producer manor. To get to these back issues, we are going to need to go through the crates- which are located in my attic.  Now, I live in Atlanta and the average temperature this past week has been well over 90 degrees so my attic is baking! Luckily, I had just read these books with my daughter this spring and I know exactly what long box they are in.

Now the backstory before the mowhawk debut is very Chris Claremont complicated.  This is looking at issues post -death of Jean Grey/Phoenix which hit Storm very hard as she considered Jean a sister.  Storm is now the leader of the Xmen. Scott/Cyclops had left the team briefly to mourn the loss of Jean Grey.  Claremont introduced a new character in this time named Kitty Pryde and Storm took a motherly/protector role to Kitty and this plays out through the debut of the mohawk. This is a turning point for the character Storm in the comics.  Before she was presented as very serene and often timid.  As she becomes leader of the Xmen, she has some doubts to if she could lead as well as Cyclops but begins finding her voice over the course of several issues.

In one of two main story arcs leading to mohawk Storm, the Xmen are in space as Professor Xavier is continuing his complicated relationship with Lilandra, rule of the Shi'ar Emprie.  Once again, her crown is being challenged-this time by her sister Deathbird.  Deathbird aligns herself with a powerful alien race called the Brood.  The Brood infect their hosts with their eggs and this turns them into Brood themselves.  This was some scary stuff reading this when I was 12 by the way.  The entire team gets infected, including Cyclops who has come back to the team.  Wolverine because of his adamantium and healing factor is the only one who is able to reject the Brood egg. This leads to a massive battles over the course of many issues.  There are also crazy space aliens straight out of Star Wars. The ending result is Storm, who is so pro life, she is worried about the crazy alien living inside her, turns Brood but is later healed by some whale looking space creature.... Claremont was smoking some major dope back then apparently! 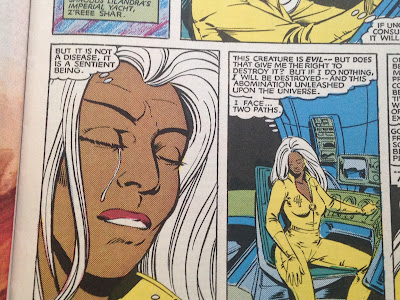 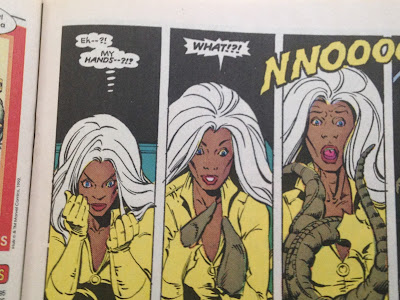 The 2nd of the two arcs, the one I think actually more leads to the confident Storm that we know and love, is when she becomes leaders of the Morlocks.  Angel gets captured by the Morlocks and in the Xmen's attempt to rescue him, Storm fights Calisto, for leadership of the Morlocks( no powers allowed). Storm defeats Calisto and proves how much of a leader she is and really steps out of Cyclops' shadow at this point( who was off marrying doppelganger Madelyn Pryor and was the leader of X Factor at the time). But Storm becoming more lethal and vicious leads to her starting to lose grip of who she is and this begins to affect her powers. 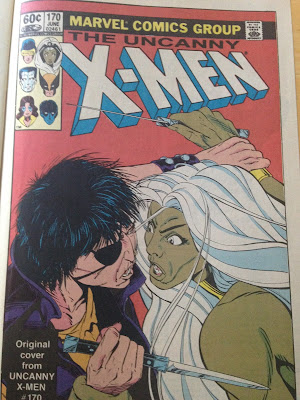 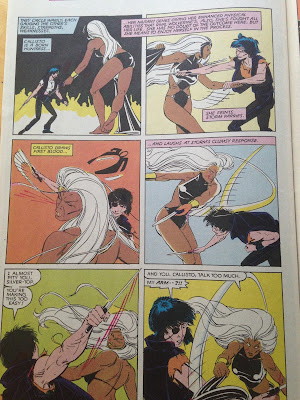 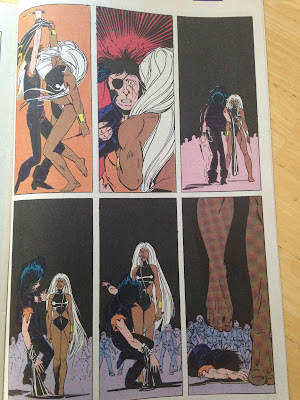 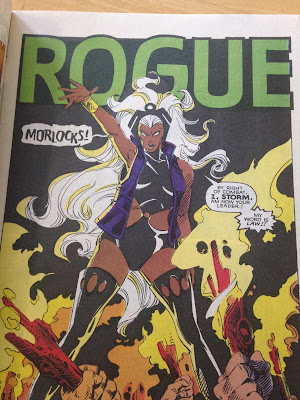 The battle with the Brood and the fight with Calisto changed Storm and her thoughts about who she was becoming started to make it difficult for her to control her powers  This internal struggle is weighing on her strongly. 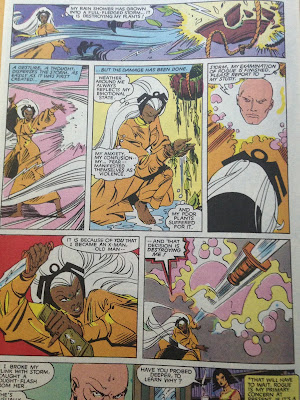 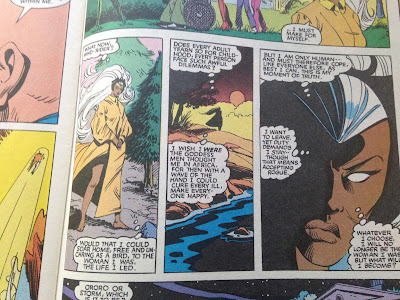 The team, now joined by Rogue, who left the Brotherhood of Evil Mutants because the lack of control of her powers, is off to Japan to see Wolverine get married.  On that trip, Storm meets one of Wolverine's exes, Yukio who was watching over Wolverine at the time from an attack from the Silver Samuri.  In her escape, she almost falls to her death but is rescued by Storm.  She encourages Storm to embrace her wilder side and Storm is intrigued by her.  And in a subsequent battle, Storm loses control of her powers.  All the while, Yukio is encouraging Storm to embrace the madness and Storm  is even more intrigued. 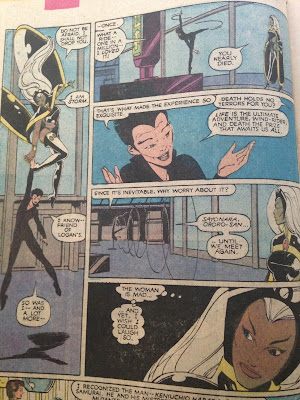 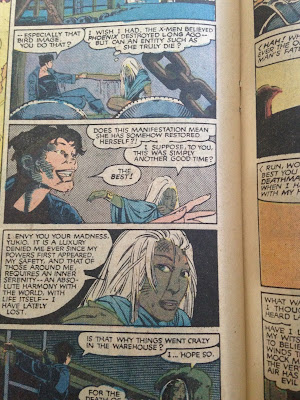 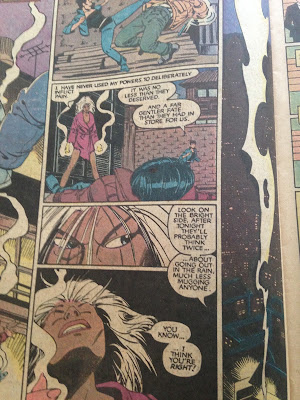 Finally, on Wolverine's wedding day, Storm becomes a new person/character!  It is not accepted by all, especially her surrogate daughter, Kitty Pryde. 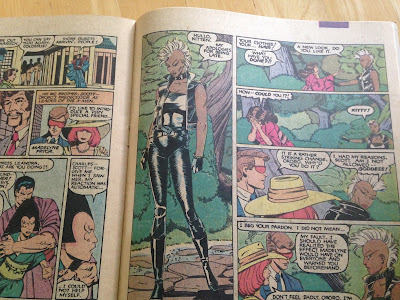 There you have Mowhawk Storm in a nutshell.  The Storm character in the book, post new haircut, goes through alot- most notably losing her powers when Forge shoots her with a weapon that takes away her powers.  But even then, Storm remained leader of the Xmen and even when Cyclops' punk ass tried to come back and take the leadership, she defeated him. 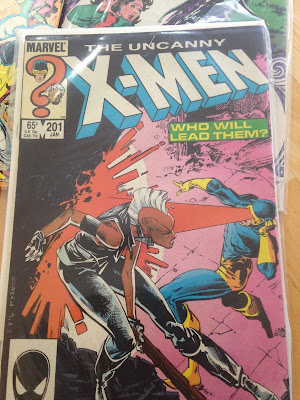 With this, you can see why some people are always bothered by the portrayal of Storm in the movies.  In the books, she is so strong and such a leader and we do not get that in any of the movies.  It will be curious as to how they handle it in Age of Apocalypse and moving forward.  Just having the mowhawk is a start but hopefully they let her shine a bit more in these new movies. 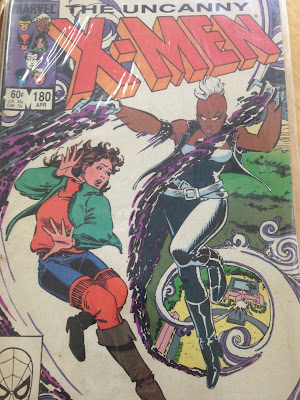 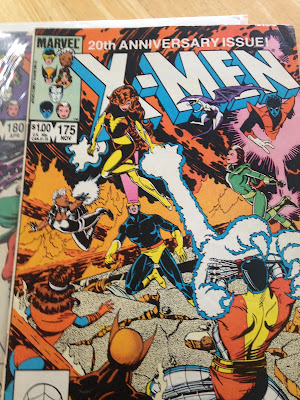 
Posted by Brothascomics at 8:05 PM