Pryde of the Xmen 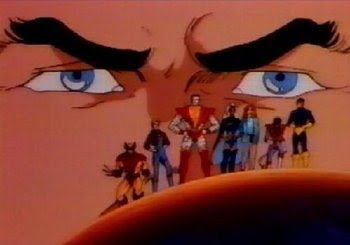 For those of us who have reached a certain age, we recall the many different times our favorite mutants actually made it onto the small screen.  This is long before the idea of having an Xmen movie( let alone 7) was a possibility.

Our first run in with the Xmen in cartoon form( discounting the 60's cartoon. I ain't that old, was on Spiderman and his Amazing Friends.  If you are of a certain age, you know that Saturday mornings were all about cartoons.  They started early and you spent most of Saturday in your pajamas watching cartoons all morning and eating whatever sugary cereal that your parents allowed( I was a Captain Crunch Berry guy back then). Since there were no DVR's at the time and #growingupblack- there was no VCR, you needed to be and in front of that TV at the appropriate time or miss your favorite show and have no idea when or if it was ever going to come back on. This show actually only has 24 episodes so seeing a repeat was rare but not that rare.

Spiderman and his Amazing Friends did two episodes with the Xmen.  The first one was called: A Firestar is born.  For some reason the Xmen are having a reunion party and Iceman and Firestar, both whom are mutants, are summoned back to the mansion for a party. The Xmen team at the time consisted of: Cyclops, Angel, and their newest members, Storm and Wolverine.  Wolverine appears to be from England or Australia based upon his accent.  This was super cool back then because of Wolverine and even tho he gets tossed and thrown all around by Juggernaut, it was awesome to see him in animated form.

The 2nd one was called the Xmen Adventure.

In this episode you get an Xmen team that consists of Cyclops, Storm, Colossus, Nightcrawler, and Warpath.  Probably at this point Wolverine was considered to be too dangerous for Saturday morning cartoons.  But it was still cool to see the Xmen use their powers in cartoon form.  The episode, like all of them NOW, is super cheesy, with horrible dialogue.  But you couldn't tell 12 year old me that this wasn't awesome and I have watched this episode probably 30 times, including once more before writing this.

These episodes ran from 1981-1983 and then into reruns for even longer than that.  Big Hutch and I watched them all over and over again, but always sat up to attention when the Xmen episodes came on.  But all things change and you get older and cartoons on Saturday morning were soon replaced by watching rasslin' on Saturday mornings- with cartoons sprinkled in a little.  While waiting to watch rasslin( UWF), an episode of Xmen came on.  I'm like, "what is this"?  I had never seen it before.  It looked different and the animation was more rich and complex than what we were used to seeing. This was Pryde of the Xmen!

We get an Xmen team now of Cyclops, Storm, Colossus, Dazzler, Nightcrawler, and Wolverine.  They are led by Professor Xavier and are fighting the Brotherhood of Mutant Terrorist- led by Magneto and consisting of the White Queen, Pyro, Blob, Juggernaut, and the Toad.  Reading the history on this pilot is that Marvel was looking to have an Xmen cartoon and commissioned this pilot.  The show never came around because of Marvel's shaky business dealings so its the only episode ever made and its really show of legend.  Since its a one off, you had to wait around for it to come on again and it did not show up often.  We had a VCR now, but you had to record Spiderman and his Amazing Friends and then go back to see if they actually showed Pryde of the Xmen.  My best friend Aaron, missed it showing many times and my phone calls to tell him it was on, led him to only see the heroes standing on the Earth at the end.

The plot is standard for a pilot and cartoon. Magneto wants to destroy the Earth, the Xmen need to stop him.  Each character gets a chance to show their powers and its all Kumba ya at the end. The episode is well received in the Xmen community of fans and it even served as the basis for a 90's video game.

If you have never seen this pilot, I would highly recommend you see it.  If you have seen it, go back an reminisce  for 22 minutes about a time when your Saturday mornings consisted of TV and cereal.

Feel free to leave a comment in the comments section!
Also you can follow/like  us on Facebook at brothascomics


Posted by Brothascomics at 9:44 AM