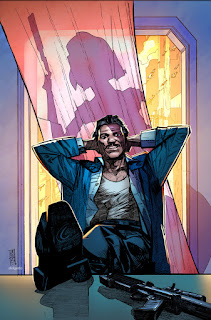 Before he was the leader of Cloud City and before he was a member of the Rebel Alliance, Lando Calrissian was just a hustler and smuggler trying to make his way in this big, dark galaxy far, far away.

This first issue from Marvel comics shows us our lovable, swag filled pirate as a man who is in deep trouble and debt with a Bounty Hunter.  In an agreement to pay off that debt, Lando has seduced a royal governor of the Empire to steal an ancient artifact that he will use to pay off his debt . Lando, being the playa that he is tho, confess to the woman that he is stealing the artifact and her heart but he is being upfront about it- knowing that she is going to now be looking to hunt him down. Of course he makes the steal and the confession AFTER he handle his business between the sheets!

With artifact in hand, Lando meets up with his loyal sidekick, Lobot.  They refer to each other as, "brothers" throughout the comic. Not sure if that is a term of endearment or they are going to flesh out they are actually related to one another. Lobot has grown tired of the hustling and gambling ways of Lando and they are going to turn over this artifact to the Bounty Hunter to settle the debt and start a live of clean living.  Of course, thieves being thieves, the Bounty Hunter double crosses Lando and only cancels 10% of his debt and forces Lando to complete one more job to erase his debt. 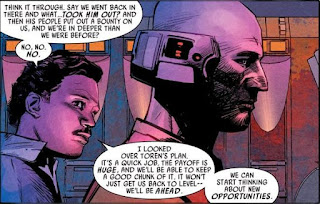 Lando's job is to take control of a ship and return that ship to the Bounty Hunter.  He assembles a team of himself, Lobot, and 2 ninja assassins and they take control of the ship in a job that was too easy!  Little did they know that the ship they stole winds up being a ship that was under the control of Emperor Palpatine!

Of the main characters of the original trilogy, Lando's backstory probably has the most to mine for potentially good story's.  His life before becoming the leader of Cloud City, how he met Han Solo and Chewbaca, his time as a smuggler with the Millennium Falcon..... There seems to be a great backstory there with a beloved character from the Star Wars Universe.  Whether they reveal this in this comic or make Lando a character in the announced Han Solo movie, I think we all would like to see and read more about the only brotha from the original Trilogy!

Posted by Brothascomics at 9:58 AM