Fear of a Black Spiderman 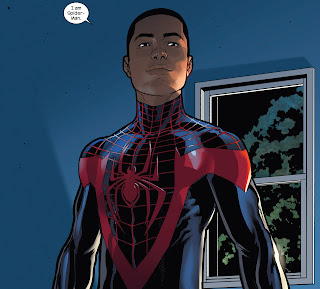 So much good has come from that Sony hack.  It really has given insight into the minds of the people running these billion dollar companies and franchises.  Case in point

In a leaked Sony email, it was reported that Spiderman needed to have certain "characteristics" and not have other characteristics when marvel and Sony relaunch the webslinger.  Here is the list of do's and dont's.

Word? Spidey can't smoke, curse,  can't have teenage sex, can slang rock, or have that gin and juice? Oh and he can't be gay neither! How whitebread is this?  More importantly, somebody really had to say this?  How could you look at the years of history of that character and book and think for a second that Peter Parker/ Spiderman would be involved in any of that?  It blows my mind.... until you read down further in the hack

And there it is! Spidey has to be white and not gay!  So funny those are at the top of the Peter Parker character traits.  All the other traits fit with his history and it seems Marvel and Sony want to keep his history of being white there as well.  Again, that is fine. I never felt that they would EVER have a black Peter Parker.  But Marvel, please do not get on your soapbox about diversity when you are mandating whiteness in your characters!  Honestly, you could tell the Peter Parker story with a black Peter Parker.  None of the things listed in the hack prevent that- except the pervasive thought that heroes have to be white and any changes to that will damage the brand.  Its not true.  Make good movies and people will come. Period.  Do not try to sell people the same thing over and over again and assume we will just take it because we love the character.  Amazing Spiderman proved that( twice)

I hope before I die, Marvel makes that move to trust and believe in their diverse characters.  Maybe it will be Black Panther, maybe we get a War Machine movie... I don't know.  But I do know that Sony and Marvel don't trust their audience to be open to new things.

Posted by Brothascomics at 10:24 PM