The Emergence of Black Panther 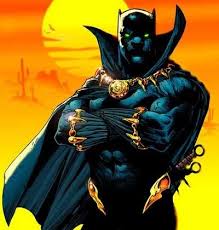 So the latest rumor is that the Director of Selma, Ava DuVernay, has been tapped to direct the Black Panther.  This is history making for two reasons, 1. she is a female director and 2. she is African American, so she fits two minority groups which have little, if any, representation in the Marvel Universe.  There will be a lot riding on the outcome of this movie due to this fact. My familiarity with this character is not that clear, however, I am excited to see the outcome of this project, because it could be ground breaking for so many reasons.

Black Panther will make his first appearance in Captain American – Civil War and his solo film will come out on July 6, 2018.  Black Panther is the first black superhero in the Marvel Universe, so his characterization is one based on significance and importance because of what this character could/should symbolize.  Chadwick Boseman has been cast as Black Panther.  Based on his critical success playing James Brown and Jackie Robinson, he should have no problem portraying such a pivotal African American character of this stature.

Rumor has it that the reason Duvurney was hired this early in production, is so that she can familiarize herself with the set of Captain America – Civil War, which is where Black Panther will be introduced. This will be the first time she has worked on a production of this size and scope and being that she is a novice to superheros in general, I think this will allow her to give this universe a fresh take on an environment that is long overdue for some diversity.

I must admit that I have not seen the movie Selma as of yet, but definitely plan to check it out.  However, she has received many accolades for her work with that production as well as the movie wining an Oscar for the title song, Glory.   I have high hopes for what this piece can accomplish in the grand scheme of things.

Henceforth, this is a production that could hopefully open many doors for Marvel Universe.