Diversity in the MCU: Where are the Black Women 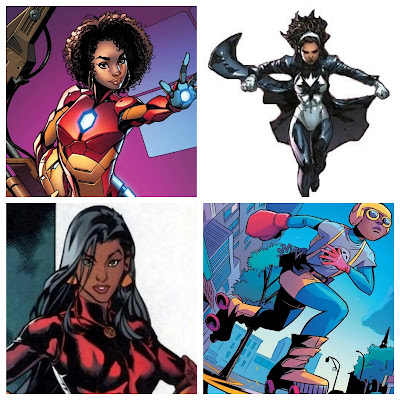 MCU to be more Diverse


So Kevin Feige suggests that moving forward, Marvel movies are going to be more diverse.

"Yes, absolutely," elaborated. "Sometimes people have asked very directly, 'Is [Black] Panther a one-off?' in terms of inclusion representation and the answer is no, it's the beginning. That it worked out as well as it worked out just encourages to head in the direction that we were going to head anyway. You look at that film and the experience of the film...it was incredible. That movie, obviously, would not have been what it was if everyone sitting around the table looked like me or you and that's actually true for all the movies."

Werd?  This sounds like something someone would say because its the correct thing to say, but words without action are just words.  And as much as I enjoy the MCU, their track record is far from diverse and like many cultural things, diverse often means adding more white women.   Lets look at the movies thus far and we are gonna take out Black Panther because one movie out of 20 is not showing diversity.

Thor 1-3
*One Biracial/Black Female in Valkyrie

Captain America 1-3
*Black women make an appearance in Civil War but that is really just setting up world building for Wakanda.


Ant-Man 1 and 2
*One Biracial/Black woman in Ghost

Avengers 1-3
*really just a rehash of characters and the only Black women are the women of Wakanda in Infinity War.  The first two movies are devoid of Black women.


So without doing the math and just using the eye test, the MCU, outside of Wakanda, has no Black women( and other women of color) in it and, as an aside,  the entire universe is devoid of LGBTQ characters.  This is not in dispute unless you want to "what about Wakanda.." me to death.  Yet there is no shortage of white women characters, both heroes( Lady Sif, Black Widow, Wasp) and supporting roles( Pepper  Potts, Agent Carter(2x), Jane Foster, etc).  Those roles do not exist for Black women in the MCU and no matter what they say, it still feels like Black women and LGBTQ characters are just being pushed aside for more white women.  Case in point....

Phase four of the MCU kicks of Captain Marvel, another white female hero.  Granted, there has been a hint of showing a Black woman who may actually speak with Photon but its suspect until it actually happens.  The other Phase four movies allegedly are Black Widow( another white woman), Black Panther 2( a given), Dr Strange 2, and Shang Chi.... an Asian character who are also horribly underrepresented in comic book movies.

Maybe, MCU is going to put all the Black women in the Fox Universe but their record there is not strong either.  Storm and Angel the only Black women in all those X-Men movies and both are played by light skinned Black women.  Fantastic Four... well Kerry Washington played Alicia Masters, right? Don't that count for something?

Its really just sad how two groups of people, who are passionate about these movies and characters are really just a forgotten group and cast aside as if their fandom does not matter.  We constantly are preaching that representation matters and MCU and other companies should know this by now.  2018 fully proved that if you make a quality movie with diverse cast members, people will show up and throw money at your projects.

I can hear fanboys already with the excuses.... "You got Black Panther, stop bitchin"! "Or there are not that many Black women or LGBTQ characters to put in the movies" Really?  Isn't that really the problem then?  The industry has catered to male fan boys and the male gaze for 50 plus years and has constantly looked over heroes of color; especially women heroes of color.

Give us Misty Knight! Give us Storm( a dark skinned one)! Give us Shard!  Make sure Photon shows up in Captain Marvel!!!  Hell give us RiRi Williams and Moon Girl!!!  The characters are there and I hope phase four introduces MCU to them!
I see better than I hear tho!

Posted by Brothascomics at 6:42 PM