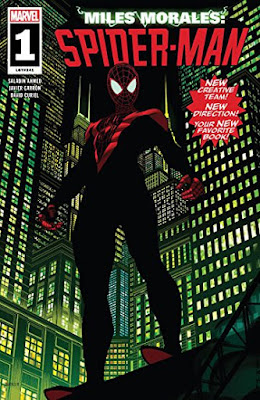 Something that often gets lost is that modern comics are often driven by the movies.  While the comics may drive the stories in the MCU and other comic book movie universes, the movies often serve as a jumping on point for new fans and the comics often respond in kind.

Case in point,  Enter the Spiderverse focuses on Miles Morales as Spider-Man and shortly before that, we get a relaunch of the Miles Morales Spider-Man comic, written by Saladin Ahmed and art by Javier Garron.

Miles Morales and his Spiderman comic that came out in 2016 was cancelled a few months ago as Miles creator, Brian Michael Bendis left for an exclusive deal with DC.  At the time, there was speculation as to what and where Miles Morales was going to go; especially in light of Peter Parker coming back to full time Spider-Man duties.  Miles was still in champions but there always felt like a need for a full time Miles comic and a relaunch ahead of Enter The Spiderverse was inevitable.

Miles Morales: Spider-Man serves as a great jumping on point for those not familiar with the character of Miles Morales.  Issue one primarily serves as a get to know you issue as it explains Miles live as Spider-Man and the important people in his life.  While it does not dwell on how he got his powers, it does reference it and points out the subtle power differences between him and Peter Parker. 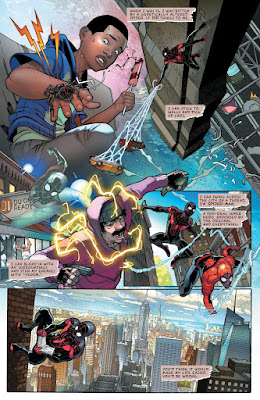 The book also looks at Miles live outside of school with his family, as well as his life at the school he attends in Brooklyn.  Focus is given to how his parents actually know his secret identity of being Spider-Man, but not all of his friends( except for Ganke).   Ahmed does a great job of blending the groundwork laid by Bendis, but also giving a twist and adding subtext to Miles' complicated dual life. 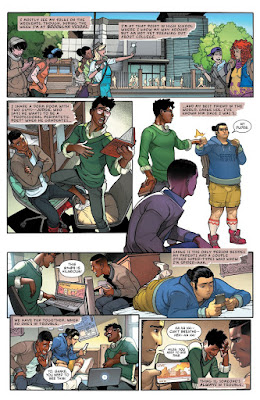 We do get introduced to a new character, Barbara, who is a love interest for Miles and our main plot as Barbara is hosting her nephew, whose father had been deported.  Ahmed, much like Coates has done in Captain America, placed an emphasis on using modern day politics as a point of reference to guide this plot line. 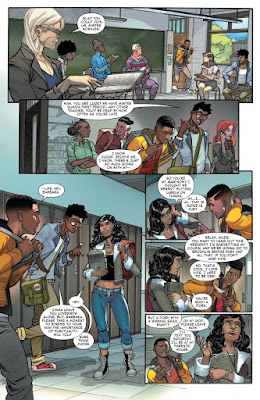 When we finally do get a bad guy to show up, its a classic Spider-Man villain in the Rhino, but all is not what it seems and we have a shocking reveal to end issue 1. 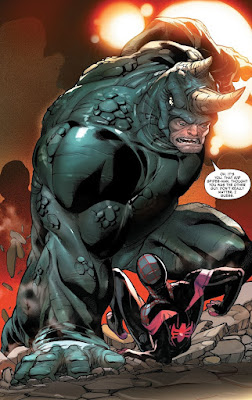 Overall, and I have written this here before, I am a huge fan of Miles Morales.  My son is half- black and half-Puerto Rican so I see my son in Miles Morales and I am hugely protective of the character.  This book was a solid entry for the creative team and has the potential to continue to move Miles past just being "Black Spiderman" or "Puerto Rican Spider-Man".  As Peter Parker is now a grown up( sort of), Miles is allowed to be that Peter Parker that most of us grew up with- fun loving, teenage Peter Parker.  The character is not burdened with all the angst of Peter, even though his life has complications.  The character and the book are fun and I am looking forward to seeing how this plays out over time.

** I will say this, tho….as someone whose wife is Puerto Rican and who speaks Spanish.  There is no way that Rio would only say two Spanish words to Miles when speaking with him and they certainly would not be Buena dia( more than likely bendicion in the morning) and loco.

Posted by Brothascomics at 3:12 PM