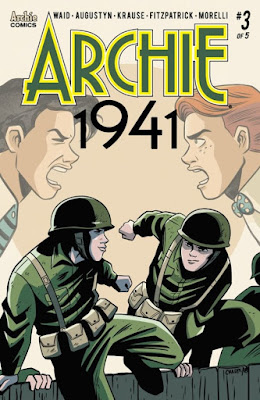 I wrote a review of issue #1 and you can find that here.

Before I get into all of this, let me say that I am very protective of Black characters in white led comic books; especially when the writer( and artist) is not Black.  Often times, well intentioned moments can come off tone deaf  to the reader or paint the writer into a corner that they will solve by using a white savior trope which takes all the focus off the Black character to paint the white character as the hero.  This ignores any historical significance of the moment and places the Black character in debt and often deference to the white character.  So when white writers ( and artist) are dealing with Black Characters, I am often looking at their hair, their dress, and use of vernacular, language, and slang.  You see, white writers will often write what they THINK a Black person will say and they have no idea.  This also includes hairstyles and clothing.  This also includes context of the moment through racial and historical lenses.

In issue one, at the high school graduation, Mr. Weatherbee calls Chuck Clayton name at graduation.  Chuck is not seen on camera, but they establish that he attended and graduated from Riverdale.  However, this is 1941 in America. No matter what non-descript town Riverdale is set in, Chuck Clayton was not attending that school because the school and neighborhoods would have been segregated and Chuck and Nancy would have been attending the Black school near them.  The thought behind this was to establish that Chuck graduated and its a part of Riverdale for a moment that happens in issue 3 which I will deal with later.

Additionally in issue 1, there is a beach scene after graduation where the entire Riverdale gang is hanging out.  Nancy is there with the rest of the crew.  Again, there is no historical basis or backing for this because in 1941, beaches were highly segregated and Nancy being at the beach with a group of white kids would have caused an incident because it was illegal for her to be there.  Again, establishing the character but no context to the event or the historical significance.

Which leads to the events of issue 3 with Chuck. As a point of storytelling, the book is dealing with how the people of Riverdale are dealing with World War 2.  It mostly focuses on Archie and at this point, he has enlisted in the Army.  Well, apparently Chuck is also interested in enlisting and is met with some resistance. 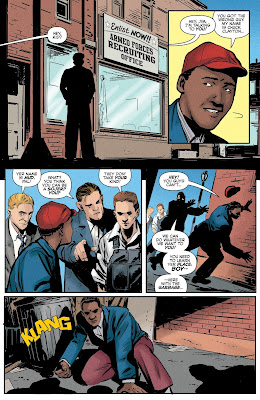 Right off the bat, notice the subtle red hat... a clear nod to the MAGA folks.  Secondly, Chuck is addressed as, "kid" when in 1941 the common reference would have been "boy" or "Nigger".  As the confrontation escalates, the language begins to match what woulda been close to 1941( minus nigger).

In panel 2, after Chuck decides to square up, he catches a beat down.  A fairly brutal one too and in 1941, chances are Chuck does not survive this encounter with 3 white men.  He'd either be dead or been thrown in jail for striking a white man.  Again, context is important in these situations and Waid is using this moment to get to the reveal in panel 3...which is also problematic 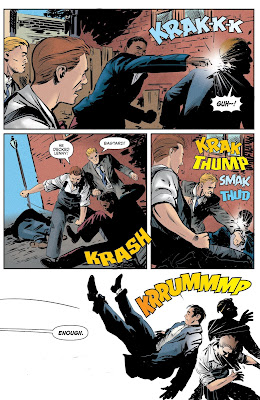 So Moose comes in as the white savior.  Not surprising and he immediately takes the focus off what happened and Waid attempts to excuse it through Chuck by saying "these guys are not from around here".  And Moose doubles down with his "We don't put up with that stuff in Riverdale"?  Huh? Really?  In 1941?  Yeah, this is terrible.  It passes off a hate crime to "well they are not from here?" And? Its still a hate crime!  But bigger than that, a moment to speak about segregation and racism is lost to make Moose look like a good guy.  And Moose is a good guy historically in Archie( except to Reggie) but if you are going to center this book on 1941 and the war and the society that surrounded it, you need to focus on the ugly shit that was happening in America at the time. 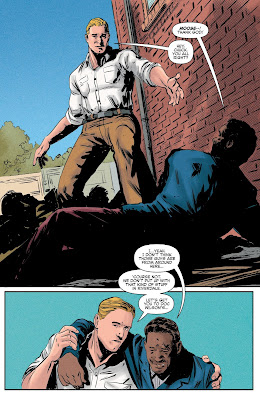 I hope, if Chuck does wind up in the Army, it deals with the segregation that he is going to experience there.  While many Black soldiers wanted to fight in the war and did, often times they were sent in support roles for white troops.  And less to say about Black troops treatment when they came back to the United States after the war and were treated like second class citizens in a country where all men were allegedly created equal.

Look, its Archie. I get it. I know its not real and its not meant to be.  But, they chose to center this book around a historical moment in time.  If you are going to do that, then take the time to focus on aspects of that time that may be uncomfortable.  It does not have to be the focus of the book, but to not acknowledge it does a disservice to the characters and the readers.

Posted by Brothascomics at 12:55 PM