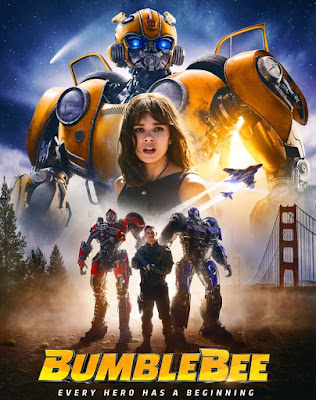 First, let me say that if you enjoyed the Michael Bay movies, I am really not sure why you follow me or read from this page.  Those movies, save for MAYBE the first one, are outright terrible and got progressively worse as time went on.  They were loud, unfunny, racist, and just a big ego feed to Michael Bay who could give a shit about Transformers.  He just wanted to blow shit up and show off young women in an overly sexualized way that only fed into his pedophile egoism.

Ok, we good?  We can start the movie review of Bumblebee.  Now mind you, I am an older Blerd who grew up on the original Transformers cartoon and the OG cartoon movie.  I will never say to you those are quality entertainment, but they do have a nostalgic heart to them; which were totally lacking in the Bay movies.  So when I heard there was going to be a new, Transformers movie, I was less than thrilled because of the PTSD I suffered from watching Bay shit all over the characters for 15 years.

So I watched with trepidation and angst and to be honest, Bumblebee is a really good movie.  Our movie starts out on Cybretron with the battle between Autobots and Decepticons.  The EFX are great here and no over done and we get to see Optimus and Starscream and other OG Transformers battle it out on the planet.  Bumblebee is presented as a great warrior and Optimus entrusts in him the plans to save Cybetron and dispatches him to Earth to await orders.  Of course, he is followed by Starscream and they have a battle on Earth seen by the military that alerts them to the presence of extra-terristial beings.

Bumblebee is injured in this battle and goes to hide out where he is found out by, Charlie, played by Hailee Steinfeld.  Charlie is a troubled character who is  still reeling from the death of her father.  She works on cars in her spare time and that is how she discovers Bumblebee where they share an intense friendship throughout the movie.  The great focus here is that our hero is a woman ( young woman) who is nobodies damsel in distress and is definitely not presented as eye candy for the male gaze; which I am sure positively pissed off Bay fans looking for their nubile, damsel to be rescued by some clueless dude bro.

Of course, two Decepticons follow Bumblebee to Earth and that is where I will stop with the plot leaks so I don't spoil.  The action is fun and intense in some parts.  The humor, at times, cuddles very close to the Bay line but never crosses it.  The John Cena casting is probably misguided but it does not take away from the enjoyment of the movie in any way.  Also, the movie is cast in 1987 and the soundtrack is full of some quality 80's tunes!

Overall, a fun popcorn flick released at the holiday for families to enjoy and the ending does give pause to possibly restarting the Transformers universe.  I pray that they do and they lock Michael Bay a thousand miles from the filming.

Posted by Brothascomics at 9:00 PM