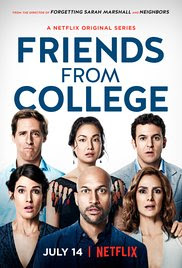 I am not sure how most people feel but Netflix original programming to me is truly hit or miss.  For every descent show the network makes, an equally awful show is running at the same time.  On top of that, Netflix recommend shows to viewers based on their previous watching and this new show, Friends from College popped into my recommendations a few weeks ago.

I was intrigued by the idea because, as an older viewer, I often think about how my life would be different if I stayed in/around the town I went to college and grew older with my friends.  The show looked to have an interesting cast... I love Fred Savage since the Wonder Years and he was great on that awful show, the Grinder with Rob Lowe last year.  I ship anything with Colbie Smothers because I have a huge crush on her.  And Nat Faxon was great on the short lived Married with Judy Greer on FXX.

You may have noticed I left off Keegan Michael Key.... He is the star of the ensemble and depending upon how you feel about him, will probably affect how much you like the show.  I was not a Key and Peele fan.  Truth be told, I never really watched the show at all.  I would see the clips from time to time, but I was over sketch comedy when the Chappelle Show went off.  Key seems like a capable enough actor, even tho I don't find him to be funny.

My issue(s) with the show tho do begin with Key... as the only Black person on the show,  you really wonder how that issue will be addressed.  We all have all seen shows based in New York, like friends, that are the whitest of all shows.  It never makes sense and even when a Black person shows up, its mostly tokenism or to play a stereotype. In Friends from College, Key pretty much stays away from stereotypes, but he is purely the token on the show- even as the star.  The idea that a Black man, from New York, has NO Black friends is almost laughable.  On the show, his character went to Harvard, but Harvard has a Black Student Union. At some point, you would think someone in his crew would be Black.  But even if you forgive all that, the idea of him being the only Black person in his crew is never brought up- even on a comedic level.  It felt inauthentic and cheap for the writers of the show to not address it.

The show itself is based on Key's character, Ethan, and Smothers character, Lisa, moving back to New York from Chicago. They are a married couple, she is a big time lawyer and he is a writer, but one with awards, but not making much money.  On the side; however Ethan is sleeping with his long time college booty call Sam( Samantha).  They have been hooking up since college and even tho both are currently married, their affair has been going on for 20 years.

The move back to New York, where Sam lives, along with all their college friends, brings awkward moments of interacting with friends who have grown up, but have not really changed.  Truth be told, all of the characters on the show are rather unlikable in their own special way. The show makes an effort to be edgy, but when you have 40 plus year olds doing the same shit they did in their 20's, its not funny, its sad and pathetic.

Beyond that , the eight episodes of the show are uneven.  The main plot line of the affair and when/if others will find out does not play out with humor or drama.  Its just there and when it finally does come to a head, the show leaves it on a cliffhanger for season 2- even tho we have no idea if the show will get a season 2.

I described this show to a twitter friend as if the people from Happy Endings grew up and became less funny and boring.  And I stick by that review.  Again, not the worst show I have ever seen on Netflix, but considering the talent involved, this show could've been and should've been much better.