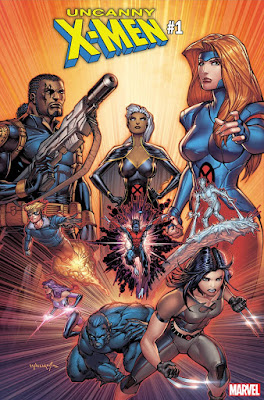 Stop me if you heard this one before.... the X-Men have been rebooted!!  Just in the last 2 years the mighty mutants have been rebooted several times over several different books.  From the nostalgia of X-Men Blue and X-Men Gold, X-Men Red, and Astonishing X-Men, the folks at Marvel have been hoping to find that magical combination to recapture some of that mutant magic from their heyday. 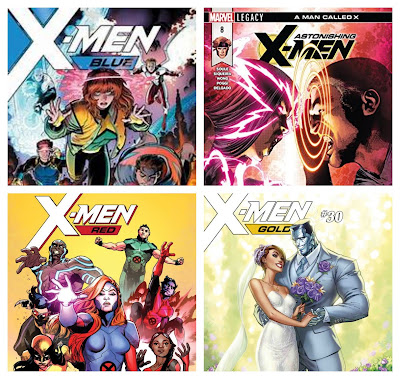 On the Marvel Hacks podcast, we have reviewed all these books and they have been inconsistent at best and flat out butt cheeks at their worse.  X-Men Blue and Gold hoped to draw upon the nostalgia of the 90's but that went out the window fairly quickly as each book got booged down in meaningless plots and unnecessary characters.  X-Men Gold pulled a "Dusty Finish" with non- the marriage of Colossus and Kitty Pryde and wasted much of the goodwill that  book had before getting cancelled.  Astonishing brought back Professor Xavier( sort of) and gave us a laborious Proteus story that went nowhere.  And X-Men Red brought back Jean Grey and placed her as leader of a ragtag bunch of mutants... and contrary to some on the Internet, the book is not great ( don't @ me)

So word of a reboot was always out there.  As the Disney-Fox merger became more reality, it was assured- especially when the colored books were cancelled.  Covers were leaked of the brand new team and the next mutant event- Extermination was to lead into the new team! 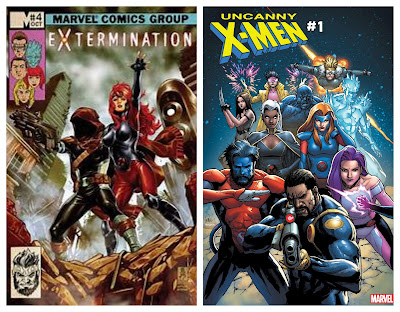 With that, Uncanny X-Men number one came out with a hefty $8 price tag and the promises of 80 pages.  While it did deliver on the 80 pages, only 1/4 of those pages are dedicated to the main plot line with the main X-Men team. The other pages are annual at best stories featuring Bishop, Jean Grey, and some long hod over Grant Morrison X-Men characters that no one cares about.

And here in lies the rub of these recent X-Men reboots.  The books struggled to decide who or what they are:  Are you books focused on the classic X-Men team or are you attempting to blend in these newer, less known characters to build a deeper X-Universe?  This makes books like Uncanny X-Men stumble right out of the gate.

The opening splash pages features the various mutants that will appear in this book and its like 20 plus mutants and to be honest, many of those mutants just  suck.  I am not sure who they fans of Rockslide are and Glob, but its certainly not me and since Grant Morrison left, these characters have been hanging out at the X-Mansion for years training and they still suck.  Having them be, even a minor focus in your book, takes away any of the goodwill this book may have endeared.

Uncanny X-Men falls onto long time tropes of government conspiracy, a mutant cure, and an X-Man whose motives are suspicious; this time its the Multiple Man.  Whatever troubles he is having brings him to Washington, DC and we get a full out battle between the X-Men and his multiples.  Its tired and boring and the sub-plot of  the mutant vaccination and humans hating mutants is well traveled territory.  Plus the ending page of the ever deepening story is worthy of every eye roll. 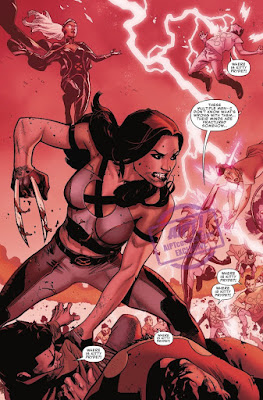 Something we have said over and over on the Marvel Hacks Podcast is Marvel is really dropping the ball with all the X-Men.  Their inability to find a group of mutants to tell the consistent stories with has pushed the book into 90's Avengers comic book territory.  I know it may be hard for some of you to believe, but the Avengers were not always popular.  The books suffered from revolving creative teams, as well as wacky line up changes that made the books, at times, unreadable.  Their return only was spurred by the fact that Marvel recognized that people look to certain characters to be Avengers and adding silly characters for fun, took away from the enjoyment of the book. And X-Men is there right now.

This current team, while not my favorite, has solid X-Men members on it.  Tell stories with just that team.  There is no need to bring in Northstar or other characters.  Tell precise, consistent stories that focus on the character development of THAT team of X-Men.

I am sure we will review Uncanny X-Men #2 on the Marvel Hacks. We all love Marvels Mighty Mutants but lately they have not loved us back!  Be sure to check out the podcast to hear us review this book( and others)!!

Posted by Brothascomics at 12:47 PM