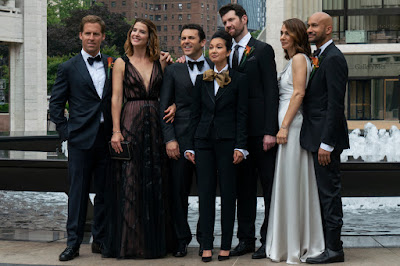 Season 2 of the Netflix "comedy" is back and I binged watched it over the weekend.  I reviewed season 1 and you can find that link here..... http://www.brothascomics.com/2017/07/friends-from-college-review.html
but to summarize season 1, the show was billed as a comedy and there were not many funny moments.  It was a drama in the way of 30 Something and calling it a comedy had people watching for laughs and there were not many.  Season 1 had this great cast of comedy characters and they turned them into bland, unfunny folks and I was never certain if that was the purpose.  Season 1 was inconsistent and uneven and it was difficult to either like or hate any of the characters because they were just bland caricatures.

To recap season 1, Ethan and Lisa are a married couple moving back to New York from Michigan  where all their Friends from College live.  The big secret is that, since college, Ethan and  Sam ave been having an affair and only one person, knows about it.  Season 1 revolves around each friends lives and their continued grasp at their youth as each person is closing in on forty.

Of course, the affair is revealed and friends are sleeping with each other and it all culminates at the birthday party for another friend and Lisa asking Ethan for a separation.

Season 2 picks up a year later! The pull back for all the friends is that Felix and Max are getting married and their engagement party has all Friends invited together for the first time in a year,  Ethan  has not seen Lisa in a year and Sam and her husband are still dealing with the betrayal of her affair and staying together only for their children and working through their issues in couples therapy.

The season evolves around the friends relationship post the affair reveal and their differing emotions dealing with it.  The anger and hurt from cheating is played out wonderfully through Lisa( Colbie Smothers) all season long and even tho she still makes questionable decisions, she comes off likeable and despicable all at the same time.  The show finds its groove in season 2 by settling on the drama and leaving the comedy to a minimum( on purpose) and allows the viewers better insight into each character over the 8 episode run.

I would rarely recommend this, but I would advise people interested in this show to skip season 1 and just watch the Netflix recap before starting season 2.  It will catch you up on all the major plot points in 2 minutes and you can move onto enjoying season 2.

Much better effort and hopefully we will get a season 3!!

Posted by Brothascomics at 4:54 PM