Is it Worth a Redbox: Gemini Man 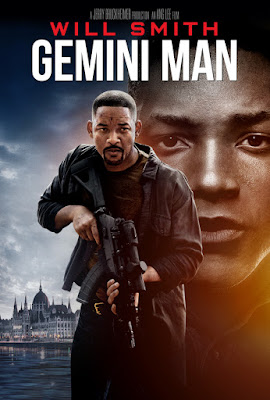 The Brothascomics crew/podcast has been accused of being haters of Will Smith.  I would dispute that a bit; especially from my end.  I was a huge Will Smith fan since he was the Fresh Prince, through Parents Just Don't Understand, through Summertime, and into his tv and movie career.  As  a Black man, Will Smith accomplished more than I think any of us ever thought he could and his place in box office history is secure.

However, no one stays on top forever.  Over the last ten years, his movies have not been good and he has been struggling to find his way back.  Like most actors of his age and pedigree, he still may be able to get a film greenlit, but the box office returns are not hitting like they used to.  His most recent screen returns have been box office gold with the Aladdin remake; although I would argue that movie would've been successful with just about anyone playing the Genie, to Oscar attempts in Concussion, and super hero schlock with Suicide Squad.  Gone are the days when Will Smith alone could guarantee a 100 million dollar box office just based on name alone.  And that is ok.  Each actor at a certain point needs to find their way.  You cannot just keep doing the same movie over and over( unless you Tom Cruise).

Well Gemini Man feels like a movie that woulda been a hit for Will Smith 15 years ago.  The premise of an aged assassin fighting against his younger, cloned self... that definitely has Will Smith 2002 written all over it.  Sadly tho, this is 2019 and the luster on the star and the idea are dull and so is this movie.

In Gemini Man, Will Smith stars as Henry Brogan, a CIA assassin with an impeccable kill record and the Agencies most reliable killer.  But Henry is getting old and wants to get out of the killing game and sadly, rogue units within the CIA wont allow that to happen.  Unknown to Henry, a department within the CIA has actually cloned Henry ( nicknamed Junior) to be the killer without a conscience that Henry has developed.  And to make sure that Henry doesn't get in the way, they dispatch Junior to kill Henry.  Really that is the gist of the entire movie.  There is a subplot with Mary Elizabeth Winstead as a jr agent who Henry takes under his wing, but for the most part, its just a long winding road of Henry trying to not get killed by Junior and, of course, trying to redeem him.  The action sequences are kind of tired and boring and the CGI to make Will Smith look younger is disturbing.  While this technology has been done sparingly in some movies and longer in others(Captain Marvel with young Nick Fury), in Gemini Man is striking in how bad the CGI is.  I mean Junior looks nothing like young Will Smith and we know this because we have thousands of hours of video of what young Will Smith looked like.

Gemini Man was directed by Ang Lee and I know some filmgoers give him props for his movies in the past; much like the star of the movie.  Gemini Man feels dated and tired and a money grab for all those involved.  You would do better and just going back to watch any pre-2010 Will Smith movie and enjoy that because Gemini Man is not worthy of your time. Definitely not worth a Redbox!

Posted by Brothascomics at 1:37 PM