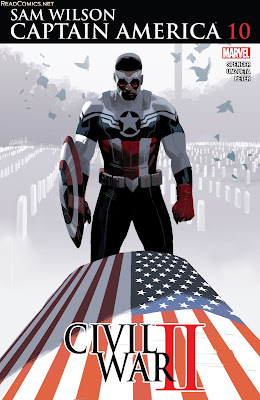 With the death of James Rhodes, AKA War Machine, Marvel was left to deal with his death in issue 10 of Sam Wilson: Captain America.  In it, Sam and other heroes are left to say goodbye to their friend and fellow Avenger.

The difference in this death of a superhero storyline, as opposed to others is that, unlike Black Goliath, who died in the original Civil War and was given quite the fucked up funeral, is Rhodey is being sent home and the story focuses on the Black super heroes he has left behind.

This issue touched a feeling in me that I did not expect.  The primary reason being that in my heart, I know this is exactly what would happen in the Black super hero community( if it were real).  Not only would all the heroes show up, they would meet before the funeral to discuss the good times and the bad and Rhodey's funeral would be a celebration of his life- not a focus on his death,  Black funerals tend to want to focus on life and a celebration of that life as this person is now going HOME.  Home can be what you make it but it has overt religious tones in the Black community and a Homegoing is understood.  Whether through music or speeches by those left behind, its done from a place of pure love.

Rhodey gets the full treatment and the writer, Nick Spencer, digs deep emotionally and culturally to bring the point home.  I do not collect this book regularly and once I was done reading it, I had to go and see if the writer was actually Black( he is not). That being said, he clearly did his research and talked to some people about this issue- which all non POC should do when handling any issue regarding race and culture( I see you Orange is the New Black).

The book begins with Sam thinking about all the issues surrounding him being Captain America as he is making his way to the church for the funeral.  Of course he shows up in his best suit( this is a Black funeral) and is greeted in the back room by "family", "play cousins"... whatever euphemism you want to use here! 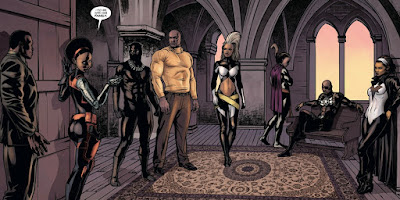 Once there, of course there is love all around the room.  Mind you, if Black superheroes were real, they would ALL know each other. They would all have each other on speed dial, and would all hang out together at each others houses and attend their kids functions.  Look, when you are one of the few people of color whether at your job, at the park, or in the grocery store, the other Black person there totally understands what you are going through and its the reason we migrate to hang with each other out of mutual respect and shared experiences.  The heroes are not different.  The issues they face often times exceed the standard battle good versus evil.  They need to navigate in a world full of White heroes, who mostly do not share their same thoughts and perspective on numerous issues that create conflict.  This is why Black people often don't engage in conversations regarding race or politics with White people because our views are often oppositional and people in the majority are too hard to convince to look at things from a different perspective because they never have to.

Sam is conflicted, too.  He knew Rhodey but is not sure who should give the eulogy since  Tony Stark is too broken up over Rhodey's death to speak.  This leads to this panel which is beautiful0 especially the look on Luke Cage's face 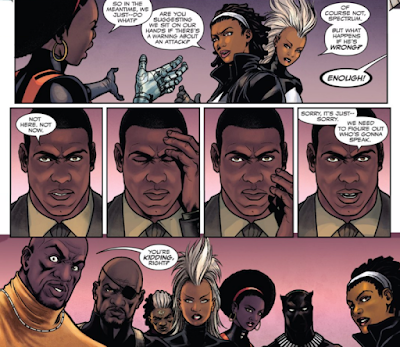 Sam needs to be convinced that- as Captain America, he is the hero that needs to speak at the funeral.  Misty Knight does this is a poignant speech over pages across the issue and she seals her speech with a kiss.

Of course Same gives the eulogy and I will allow you to read the speech in the issue.  But what struck me as I read the issue was the turnout for Rhodey's funeral and the point the artist and writer made to make sure the crowd shots featured Black people in them.  Look, if Black super heroes were real and one of them died, it would devastate Black folks way more than White people.  There are so few Black heroes and one of them dying would make a huge impact in our community.  Think of the out pouring for Muhammad Ali this past month and his funeral.  It would be like that- but on a much grander scale. 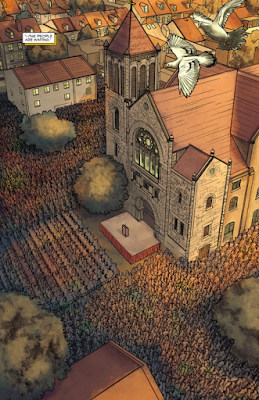 So as upset as I was/am about the death of James Rhodes, at least in death, they gave him a proper send-off that respected not just the character, but the super hero community from which he came from.  I can only hope in the future, that others writers do their due diligence when researching and writing characters of color.  Its needed and makes a huge impact on the reader when the story comes from a place of love and respect.

Posted by Brothascomics at 11:48 AM