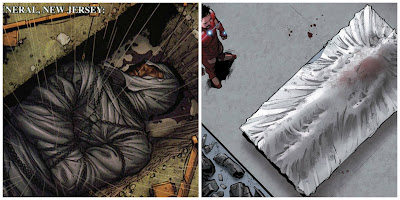 So Marvel dropped Civil War 2 recently and I am going to spoil a major portion of the plot line and story so  if you want to remain spoiler free,  you should stop reading here.....

The plot of the book is that a new Inhuman has Minority Report powers.  He basically can see when a crime is going to occur and our heroes can be dispatched to heed off said threat before it happens.  I mean literally, Marvel is straight ripping off Minority Report!  Like Tom Cruise should be mad as shit when one of his Scientology Minions reads it to him.  Anyway, the first time, it works perfectly. Our heroes respond to threat, organize their plan ahead of time, and the celestial being that was gonna threaten Earth is dispatched to much rejoicing. 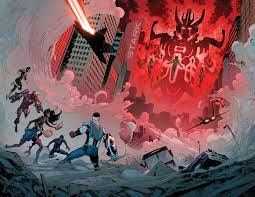 Later, tho when Tony Stark finds out about this new Inhuman and his power, the moral conundrum of "Would you kill baby Hitler?" arises and creates a minor difference of opinion between Iron Man and Captain Marvel. But what to do next is left open with Tony thinking we cannot punish people- even villains for things they may or may not do.  Captain Marvel feels that heroes should do whatever they can to save lives and the Earth.

The next time our Inhuman has a "vision", it revolves around Thanos and the Ultimates set out to meet the threat... this time however, there is a casualty on the battle field and a death..... James Rhodes or Rhodey, AKA War Machine is killed by the mad titan, Thanos.

Obviously, Tony is upset that his best friend has been killed and this hurt turns to anger when he finds out Captain Marvel used the Inhuman to ward off a threat from Thanos that may or may not have happened in the future.  That is your set up for the new series.... After all that tho, I been wondering, why did they kill ANOTHER Black guy in Civil War?

You can go back and check our original Civil War comics podcasts here:


We talked about how the death of Bill Foster, AKA Black Goliath, was not really necessary and it seemed that the Marvel powers in charge felt the need to kill someone so they chose a character that nobody really cared about in Black Goliath.  It felt forced and the reaction of the heroes at the time was so cliche.  For real, like anyone of them cared about Black Goliath. 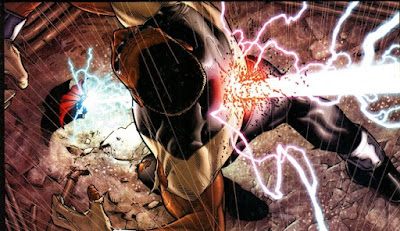 In looking to make a bigger impact( I guess), this time they kill Rhodey. I mean, ok... I guess. Yes, Rhodey is Tony's homeboy. And, yes, he is a hero in his own right, but does Marvel not see the bad optics here? I mean you take two  limited series- ten years apart, and the catalyst for the event is the death of a Black guy.  How does someone not have deja vu in the writing room?  Nobody thought this might be a bad idea or would look bad based of previous series history? There are many people that coulda been killed besides Rhodey. On top of that, nobody stays dead in comics. NOBODY! So you could kill anyone and retcon it later to fix it. So why Rhodey and Black Goliath gotta die?  Its because they are Black and disposable characters. Period.  Rhodey, even tho he has a history as Tony's buddy/sidekick, was deemed expendable as a plot device when any number of characters could have fit that role to move the story along.

This speaks to the much larger issue of the lack of POC in comics and other forms of media/entertainment and their relevance.  Its become a trope where the Black characters in predominantly white situations in movies and tv, are often the first person voted off the island, kicked out of the house, or flat out killed off.  Black people watch these shows with one eye open because we know at any moment, this person of color is about to get killed.  I always tell people to date POC characters in media, but don't marry them because you are going to be widowed.  Marvel and DC both do not see this.  They think its just a point to tell a good story without realizing how fucked up it looks to people on the outside.

Who knows how this plays out in the long run of the series.  Maybe Rhodey really isn't dead. Maybe he's a clone. Or a Skrull. Or maybe the power of white, princess love, Captain Marvel will bring him back to life and we all sing Kumbaya with Thanos at the end.  Who really knows?!  But I know this, when Civil war 3 hits in 2026, every living Black Marvel hero better be looking over they shoulder because Death could be standing right behind them.

Posted by Brothascomics at 12:33 AM