Where is Black Love and Romance in comics 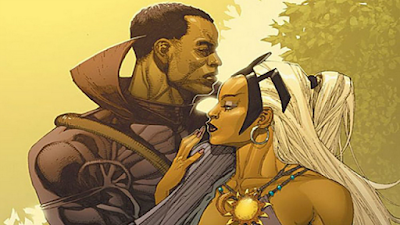 So our friends over at we got this covered published this article on the top 8 romances in comic book movies and I had to pause not to throw up for a minute.
http://wegotthiscovered.com/movies/8-best-couples-superhero-movies/
Granted, these are "love" stories from the movies and some ripped straight from the pages of the comics that inspired them, but it made me pause because the list was whiter than Maine in December.  All 8 couples from the movies were all white and not even a hint of love for people of color.

But this made me think even deeper and in the modern comic book universe in movies and on television, there is no real love interest for Black characters WITH another Black character. Storm and T'Challla had a storybook romance and wedding over 10 years ago now, but beyond that, finding a Black power couple in the world of comics and comic book movies is hard as fuck to find.  Lets break this shit down for you!

X Movies
Now we really only have Storm to go on here, right?  That's a problem in and of itself, but Storm has been in 5 X-Men movies( 4 for Halle Berry and 1 for Alexandra Shipp) and Storm cannot find any love? They teased a romance with Nightcrawler in X2( but he ain't Black) and she found swirl love with Wolverine in a cut scene from Days of Future Past but beyond that- nothing. Yet we are burdened with the Cyclops- Jean Grey- Wolverine love triangle, along with Iceman-Rogue- and Kitty Pryde throughout these movies. In comics, Storm has been unlucky in love, too.  Forge loved her, but took her powers and the marriage with T'Challa didn't exactly pan out but X movies have yet to focus on or create a credible Black, male character in comics beyond Bishop and Bishop appeared for all of 13 seconds in Days of Future Past.  And never, ever bring up to me Darwin from First Class. EVER! 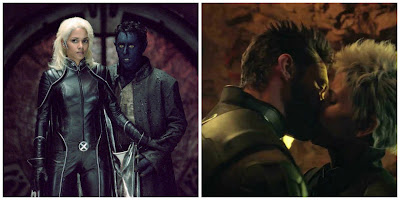 DC Movies and Television
Modern DC movies have only 1 Black "hero" to appear in them and that is Deadshot, played by Will Smith.  In Suicide Squad, you see him with his daughter, who appears to be African-American, but we don't see head or tail of the mom.  Amanda Waller also makes an appearance but there is no apparent man in her life and technically she is not a superhero.

DC gets alot of props for its diversity on its television shows, but Black on Black romance and love is lacking.  There is plenty of swirling going around but love between Black characters is about  non existent.
Flash has Barry swirling with Iris and even the little tease Iris had with Tone Bell this year- you knew that shit was not gonna happen since they been teasing Barry and Iris season episode 1.

Marvel Movies and Television
If we examine the heroes in Marvel movies, we see four Black heroes in Nick Fury,  War Machine, Falcon, and most recently Black Panther. Fury is married to his job, I guess.  War Machine has no romantic interest and neither does Falcon.  Black Panther, as introduced in Civil War, was focused very much on his mission and seemed to not have anytime for romance.  Yet, we get a full on love story with Captain America and Agent Carter AND Peggy Carter over the course of these movies.  We get to see Tony Stark and Pepper Potts love story play out.  Hawkeye has a secret family tucked away with a wife and kids.  Thor has Jane Foster and Lady Sif he wanted.  Hell even Black Widow and the Hulk have a romance in Age of Ultron.  But the Black folks? Nah, Falcon and War Machine are too busy following orders from their white besties and getting paralyzed to have a romantic relationships. Hell, they can't even get their swirl on! 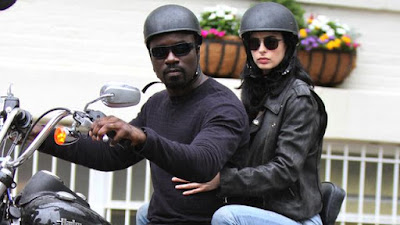 And on Netflix, between Jessica Jones and Daredevil, The Night Nurse, played by Rosario Dawson, is sort of swirling with Daredevil, and Luke Cage is swirling with Jessica Jones.  It seems in the upcoming  Luke Cage series, Luke may possibly get with Misty Knight, but they have rarely been a thing in the comics.  She has mostly swirled with Iron Fist.

So why is Black love and romance so taboo in comic related properties? Even currently, before he was killed, War Machine was with Carol Danvers( Swirl) Luke Cage is with Jessica Jones( swirl), Black Panther is married to being the King of Wakanda, and Storm is single as single can be up in that X-Mansion.  The only real Black romantic couple are Sam Wilson and Misty Knight and for how long will this last as most people ship for Iron Fist and Misty Knight. 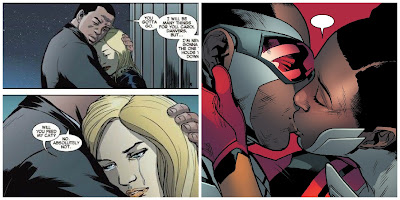 I truly believe Hollywood fears Black people in love and in unity more than they fear Black rage and anger.  This lack of Black love on screen and the decolorization of Black women in particular is troubling and disheartening.  I pray that Black Panther has a Black love interest in his movie and she is not the one light skinned sista in Wakanda.  And for damn sure T'Challa best not be swirlin' or we gonna burn these theaters down!

Posted by Brothascomics at 11:30 PM