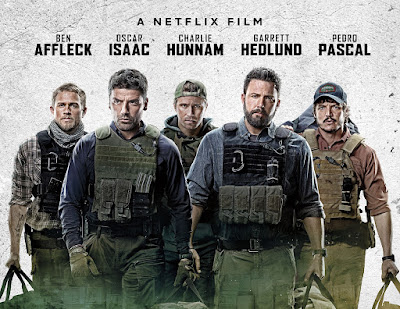 From time to time as a Netflix subscriber you get these, "You may like" notices from Netflix and I always assume that its based upon your previous viewing history and for the most part, Netflix be wrong as hell for me because my viewing habits is weird AF.  Sometimes I am watching cartoons, other times I binge the New Girl, and I am forever watching Spanish novellas on that thing so its a shot in the dark on what I may like.

About a week ago, tho I received a notice about the movie Triple Frontier and I was even more curious as to why it made it into my inbox.  As a general rule, I do not watch action/adventure movies because they tend to not hold my interest so I am sure it was not because flagged for that reason.  Then I looked at the stars of the movie; most notably Oscar Issac and Ben Affleck and I'm thinking, "oh yeah, now I see why it flagged".  I have probably watched the Last Jedi 50 bazillion times on Netflix and the Force Awakens another 50 bazillion so anything with Oscar Issac constantly makes its way onto my suggestions list.

First let me say before this review begins is that I am not a huge fan of violence, even fake violence in movies.  Its just not my taste.  But i forged ahead and watched this movie because I was intrigued by the stars of the movie, that not only included Issac and Affleck, but also Charlie Hunnam, Pedro Pascal, and Garrett Hedlund.  A quite sizable list of Hollywood hunks might I say and definitely a reason to press play without knowing anything about the movie.

Our plot centers around a drug lord who has taken control of an area in an unnamed portion of South America( its Colombia, they just don't say it).  Issac, playing Santiago, is working with a US government agency charged with trying to take down this drug lord.  He has enlisted a beautiful informant who has been feeding him information with the hopes of freeing her brother from prison.

Santiago has been working this government operation for many years and is looking to get out, but by doing so, he would like to make one more big score by taking down the drug lord AND stealing all that drug lords money.

He recruits his crew of mercenaries that he has worked with over the years played by Hunman, Pascal, Hedlund, and a gun shy Ben Affleck who has been out of the game for many years after being shot.  Afflecks character, Tom, is living an unfulfilled life in the private sector selling houses and going through a divorce that is stretching his finances and his patience.  The thought of one last big score intrigues him and even tho he wants to refuse, he agrees, along with the others to do this one last job.

This sets up a segment of the movie with that siege of the drug lords mansion to get the money and its a very tense and intriguing scene that does delve into much gun violence so if you are of the squeamish nature, there will be some moments where you are turning your head.  Once the job is done, our motley crue needs to escape and unfortunately for them, there are some pitfalls in their escape plan.

I do not want to spoil too much, but I will say that the last quarter of the movie often gets bogged down in the minutiae of not actually having a villain in the story.  Yes the drug dealer is a bad person, but there is no real antagonist and as the movie is moving to its ultimate climax, you are left feeling anxious as to how this story will end because no matter how you slice it, Santiago and crew are not good guys!

Overall, a fun movie.  Maybe a little too long by the end, but not too bad.  I think its a perfect Netflix movie in the sense that its more watchable from home on your big screen tv than paying $15 and watching it on the big screen.  The characters are all likeable, even tho they are doing a despicable thing.