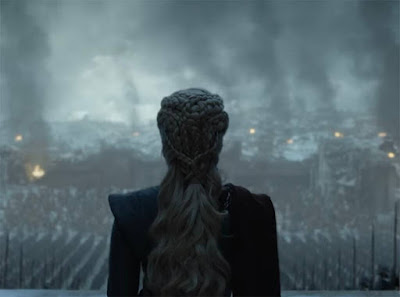 Its taken a few weeks to process the finale for Game of Thrones.  As someone who came late to the show and missed the initial hype surrounding it, I was not as emotionally invested as those on our podcast, I Know What You Did Last Winter.

We recapped several seasons, episode by episode, and most of this was done with the rest of the team from Brothascomics ( you can find the podcast below).  I came on as a regular for the start of the final season. It had been two years and the crew was ready and chomping at the bit to see how they were going to wrap us this historic series.

Granted, series finales are a touchy subject.  Attempting to wrap up a popular tv show or movie is never an easy task for writers and with the exception of MASH, most people tend to fall in love it or hate it on series finales.

But I think we at Brothascomics convinced ourselves that Game of Thrones was going to be different and from the jump, we were wrong.  The first two episodes was just call back reunion shows and not much really happened.  By the time we get to the Battle for Winterfell, where we finally see the battle with the White Walkers, its epic and grand but ends very suddenly with the death of the Night King and now we are two full episodes of, "Now what" and that is exactly what they gave us.

The season finale really turns after the death of popular characters Missandei and her death at the hands of Cersi leads Danerys to go Full Heel... a wrestling term when a good guy wrestler turns into a bad guy.  Even tho she had agreed with Tyrion to stop her attack on Kings Landing when the bells rang, Dany said, "Fuck them Kids" and unleashed Dragon Fire on the entire city burning it and most of its residents to ash; much to the chagrin of Tyrion and her uncle/love Jon Snow.

In the series finale, its the aftermath as the city is in ruins and people are worried that The Breaker of Chains is actually about to become the Mad Queen and what needs to be done.  Tyrion, who for some reason thought Dany was going to be fine with her best friend being killed, quits being the Hand of the Queen and winds up in jail.... but is still alive for some reason.  Jon Snow is distraught and makes a decision, after speaking to Tyrion, to kill the Queen.  This made no sense and went against all logical sense of the character of Jon Snow.  And once its over, the Kings Council, on the recommendation of Tyrion, name Bram the King of the Realm... Bran the Broken.  We get the standard, Return of the King ending as Jon is sent back to working on fries at The Wall, Sansa is Warden of the North, and Arya is off to parts unknown.

Essentially that was it. And I think if this season had been given the full ten episode treatment, these stories could have fleshed themselves out with depth and there would not have been this crazy anti fan backlash once it was over.  The pacing of the final season was all over the place and the finale was rushed with no emotional payback for the time that fans invested.

And that is really the rub.  People invested time, feelings, and money into this show and they/we felt that the final season didn't deliver on its investment.  It felt hollow and empty and as time has gone on, reports of this season just being a money grab by HBO emerged.  And look, I am not mad.  The show and the creators don't really owe the fans anything.  They had their vision, ,wrote it, shot it, and presented it to us as fans.  We can love it or reject it.  That is what art is.... its the vision of the artist that matters most; not always the reception of the viewer.

That all being said, it was sad to see the show go out like this.  I had hoped for a better ending, a more gruesome death for Cersi, and to see Jon Snow go from bastard to King Bastard, but alas none of that came to be.  A great show ends with a crappy ending. Join the Sopranos, Seinfeld, Lost, and Dexter club Game of Thrones.  You are in good company!