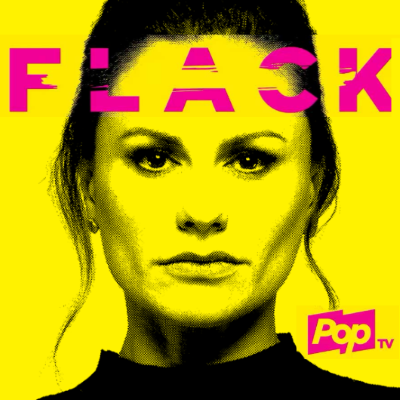 In the entertainment world, a flack is a public relations, or PR person who takes care of the day to day operations of a celebrity.  Much of that, is small potato activities that the famous are often too busy to deal with.  But, a flack also has to deal with the major situations celebrities often find themselves in they need to clean up and spin the public relations so the celebrity does not become a pariah and lose all the money and notoriety they have as a celebrity.

This PopTv show aired in the winter of 2018 and I just got a chance to finish the series.  I was drawn to it primarily because I am a huge fan of Anna Paquin and this vehicle is really a return to media after having a baby and some personal issues that I am sure her PR people needed to do with.

Paquin plays, PR Flack,  Robyn.  She is an American who lives in London and works for a PR firm that represents a wide variety of entertainers from actors, singers, and athletes.  The pilot opens with Robyn looking to clean up a mess by one of her clients; a closeted soccer player whose night on the town with a male prostitute almost turns tragic.  And word of the worlds most famous footballer being gay definitely is not news they want getting out.

The underlying B-plot for the series is Robyn and the life she has built in London.  She has followed her sister, Ruth, to London.  Ruth has a husband two kids who are dealing with the challenges that presents.  Additionally, the sisters reason for being in London is tied to their mother and her suicide.  This incident has left Robyn damaged and besides throwing herself into her job with zest, she also has a major drug issue with cocaine.  And on top of that, her relationship with her live in boyfriend seems idyllic, but there are secrets that look to pull them apart in a moment.

Overall, the series is well written and well acted.  There are some preachy moments here and there, but it does not take away from the overall quality of the show. Pacquin does a great job of playing a trouble character who is still relatable, but also makes you wonder. "Girl, what is you doing"?

I am not sure if the show is going to have a season 2.  It ends on a cliffhanger and there has not been word if the series will be picked up for another season.  But these six episodes are quality television and is worth the binge if you have the time.

Posted by Brothascomics at 5:11 PM