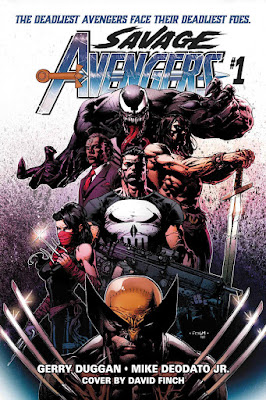 When this title was announced, I was in heavy sigh mode because, much like X-Men in the past, and the Avengers more recent past, the name Avengers had been watered down to not mean what it used to.  Heroes( and villains) had become Avengers and the elite team that it used to be,  became less and less important. From the New Avengers, to Secret Avengers, to Dark Avengers, to A-Force, and that hybrid Xmen/Avengers team, everyone was getting a chance to become an Avenger on some level.

With the success of the MCU Avengers, the comic has come back to a more "traditional" team with the big three, Iron Man, Thor, and Captain America, but also adding other MCU characters such as Black Panther, Dr. Strange, and Captain Marvel.  This main line Avengers book has been around for about a year and a half and serves as the only Avenger book outside of the West Coast Avengers which is played more for comedy than traditional super hero fare.

So when I saw the solicit for Savage Avengers, I kinda rolled my eyes thinking, "don't they ever learn"?  From doing a little research, it seems that since Conan the Barbarian came back into the fold at Marvel in 2018, plans had been underway to introduce the character back into the Marvel comics line; first with this Savage Avengers book and later his own solo series.

I guess that news would hit you based on how you feel about Conan.  My history with Conan goes back to the newspaper comic and the early run that he had at Marvel.  In fact, one particular issue of Conan scared me so much of Octopus, that I stopped reading the book because the images damn near scarred me for life.

My other run-ins with the character are from the horrible Arnold Schwarzenegger movies in the 80's where they had James Earl Jones in the worst wig ever.  So I have never been a real fan of Conan.  Seemed more like a white man fantasy trope of a big strong man who does what he wants, when he wants, to anyone who wants... not real exciting stuff for a progressive Black dude like me.

Regardless, I picked up issue 1 and honestly, beyond a writing trope I despise( I'll come to it), I rather enjoyed the book.  The issue opens after the abduction of a famous, Italian singer and he is brought to the Savage Land by a mysterious group that is hoping to use his sacrifice and the sacrifice of others to bring back an ancient being.  The book is drawn beatifically and horrifically by artist and its a hell of an opening for this book. 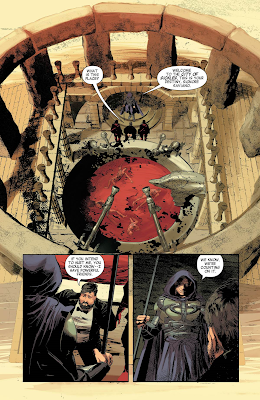 The cover art lets you know of some of the members of the team, the most prominent one on the front cover being Wolverine in the classic brown costume.  And he does make his way into the book after the Conan has a brutal battle with the Hand.  An accidental sword shot to the head then sets up page after page and panel after panel battle between the Wolverine and the Barbarian.  Each gives as good as he gets and its a bloody mess for about 10 pages.  It ends kinda corny, but I am not sure how they were going to pull out of this battle without one of them dying. 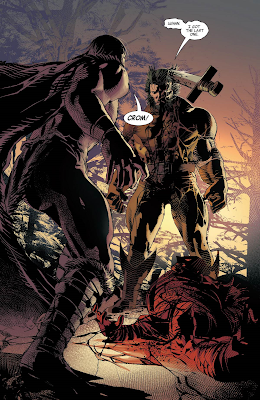 Meanwhile, and this is the trope I spoke of earlier, Dr. Voodoo is in Madripoor and is attacked by the Hand and brought to the same leader who sacrificed our singer earlier.  As they look to sacrifice Voodoo to the Marrow God, Wolverine attempts to make the save but its too late as Voodoo has his throat slashed.  Too often comics love sacrificing Black characters as a plot device and the only reason I am not screaming more about it is because I read issue 2. 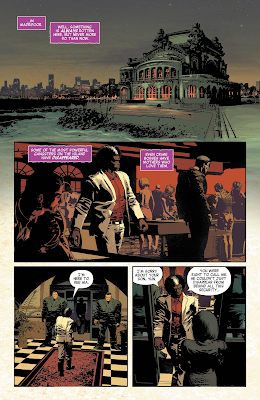 We see Wolverine battle the Hand in another brutal battle as we shift again to the grave of someone... its Maria Castle, deceased wife of Frank Castle, the Punisher and her grave is empty.  That's how our book ends and honestly, I enjoyed it more than I thought.  I hope its a short run tho because to keep up this level of killing and brutality will become watered down after a few issues.  Fleshing out the story of the Marrow King, along with adding characters  scheduled to appear, like Venom should be to satisfy fans looking for their on traditional Avengers fix.

Posted by Brothascomics at 9:38 PM